Having only scratched the surface of Brazil on my multiple week holiday to Forteleza, Salvador da Bahia, and the interior of Minas Gerais, I vowed that I must go back to Brazil. Before my next trip,  I already know that I will have to brush up on my Portuguese and samba. In the meantime, I will be dreaming of caipirinhas (typical cachaça based cocktail with mint and lime) beachside with some salgadinhos (varied appetizers). In order to narrow down the destinations on my next trip to Brazil, I asked a travel writer and peer, Kevin Ball, to give us a summary of a great way to see many Brazilian destinations that are easy to get to with the right base of the coastal city, Recife. Desfrute (Enjoy) his recommendations.

Brazil is a popular destination and I am sure you will have seen the country being mentioned more and more in the media with the upcoming World Cup and Olympic Games in 2014 and 2016 respectively. These international events are sure to bring hundreds of thousands of visitors to some of the major cities, but Brazil is a vast country where cities are separated by beautiful rainforest, shrublands and coastlines. I think to truly experience the beauty of Brazil one must see as much of this varied landscape as possible. For this I would recommend setting up in a city that is either close to or directly attached to one of Brazil’s many Natural Heritage sites.

Recife is a great coastal city (pictured above) that will make an excellent base for any traveller wanting to stay in the city but go exploring too. I recommend Recife because it has all the features one would want from a major city – hotels, varied restaurants, nightlife, preserved historical buildings and so on along with gorgeous beaches and a year round warm temperature. From Recife, you can easily visit all of the following: 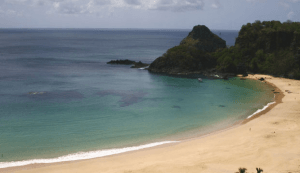 This group of islands can be reached from Recife by airplane or boat, making it one of the most easily accessible remote islands imaginable. I would recommend planning your trip to Fernando de Noronha in advance though, because only 420 people are allowed to visit the island each day and those that do visit must pay a conservation charge of R$130 for every day they spend on the island. The limited access and charges are worth it though because when you visit the island you can see that these measures are in place to protect the island’s breath-taking natural splendour. On Fernando de Noronha, you can see some exciting wildlife. In the water, you can swim with turtles, tropical fish, and if you are lucky, dolphins. On land, there are a variety of birds and lizards to observe; some of them, such as the eared dove and the Noronha skink, are endemic to the islands. 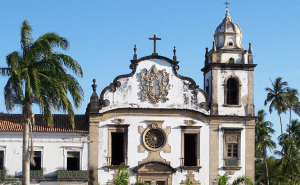 Just north of Recife is the historically preserved city of Olinda. The architecture in this city is stunning and varied. The oldest buildings are from colonial times when control of the city passed between settlers of Portuguese, French, and Dutch descent between 1545 and 1630. This clash of cultures can be seen in the variety of churches, civic building and ornate homes strewn across the city. Olinda is a Historical and Cultural Patrimony of Humanity as awarded by UNESCO; which essentially means its history must be preserved for future generations to enjoy. Olinda also has a large carnival but, unlike its more famous cousin in Rio, admission to Olinda’s carnival is free.

If you keep traveling north of Recife, it is not long before you reach the city of Joao Pessoa and then a little farther north to Natal. These cities are so close together that they are becoming something of a megalopolis. However, they still have their individual quirks and eccentricities. These are the three closest major cities in Brazil so I would recommend visiting each one to soak up as much individual Brazilian nightlife, culture and gastronomy as possible.

**Guest post provided by Kevin Ball of  SunsetVisitor, who specialise in travel and booking information for a variety of destinations in Brazil.