Most know of totems poles, whether from social studies classes of childhood or from visits to the Pacific Northwest. As a little refresher for those unfamiliar, totem poles are carved works of art typical of the Pacific Northwest natives telling legends, clan lineage, events, battles, or even in remembrance of an individual. Unlike common belief, they are not religious monuments. In essence, totem poles are a collection of stories where each carved figure represents an important chapter in a family, clan, area, or individual.

Over the past months, I had the opportunity to learn more about the Pacific Northwest while in Southeast Alaska. On a visit last month to Sitka, I was privy to walk along a beautiful coastal trail in Sitka’s National Historical Park, which displays dozens of Tlingit and Haida totem poles. In passing these poles that dwarfed me in comparison, I tried to decipher the stories through their symbols. Because of the structure of the poles, I came to the conclusion that the stories are told from top to bottom with either the beginning of the story or the start of a lineage at the top.

In reflection, I thought about where do I have my totem pole. As a writer, I can say that many of my good times and good stories are here in this blog. However, I have another symbolic representation of my story that was given to me by my mother. It contains portions of each stage of my life starting in Wisconsin, moving to Spain, studying in Boston, Massachusetts, my nearly a decade in Florida, and memorable travels, hobbies, and events. Like a totem pole, my story can be told with images; however, I do so with a charm bracelet. 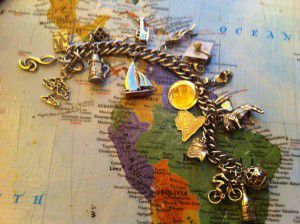 Unlike a totem pole, my story is not told in a particular order. Instead, it is rather cyclical with symbols highlighting chapters with all of the items playing roles in my story. As you can see, the places where I have lived are represented by a cheese wedge and beer stein for Wisconsin, a matador and a bull for Spain, a flip flop and palm tree for Florida, and a Tlingit eagle for Southeast Alaska. My interests such as music, traveling, SCUBA diving, sailing, biking, and wine are present. Also, I have gathered charms that include important life events such as a cap and tassle for my scholarly side, a tree for my accident and Look Up Day, and a helicopter for my PIC (Partner In Crime).  Although my bracelet is getting quite heavy, my story is nowhere near to complete. It is a good thing that there is still plenty of room for additional charms and likewise new hobbies, travel, and events.

I look forward to sharing more good times and good stories with you and adding to my bracelet. If you haven’t already, please connect with me on Facebook, Twitter, Google+, and YouTube.