When I received the call that a friend needed extra hands for a regatta off of Fort Lauderdale Beach, I immediately offered myself as Chief Stewardess. I thought that many summers sailing on small monohulls and catamarans in the Midwest would prepare me adequately for it. However, I was naive. Sailing on the ocean with strong winds and a spinnaker for competitive time is a completely different adventure than a lazy, lake sail.

So, I showed up for duty early on a Saturday morning greeted by Captain Bob and his First Mate, Jaz. The crew consisted of seven sailors. All had many years of sailing and racing experience but one. Yes, I was the very green sailor in the mix. I was given my first assignment of getting provisions for the crew and succeeded; thus, the crew (and I) embarked upon a well timed cruise from the dock to the regatta start line. This entailed going under the Las Olas and 17th St Causeway bridges and passing through Port Everglades.

Once at sea, the winds changed and in the nick of time, just before the 11:20 start. The seemingly calm day turned into a racer’s dream (maybe even a wet dream) with winds up to 20 knots and seas at 3-5 feet . Without a doubt, both conditions tested my sea legs with bruises, scrapes, and near falls to prove it.

Although the regatta officials marked the start of each boat with a horn and flags, Captain Bob wanted to know precisely how long until the race began to tack properly and chart the best course. My second assignment was to watch the time. Armed with my trusty iPhone, I called out each expiring minute. However, when the race began, it was all hands on deck without the ability to time a thing. I placed my prized possession in my dry sack moments after snapping the shot of the First Mate at the bow (seen above) and not to take out again until post-race in relaxation mode (pictured at end of post). 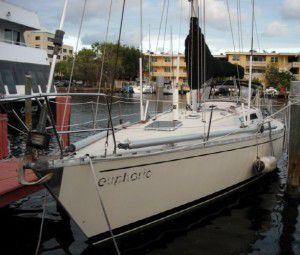 And so the 15th Hospice by the Sea Fort Lauderdale Regatta began.  It’s designed as a challenging, 12-mile, multi-leg course around marks off the coast of Fort Lauderdale Beach benefiting Hospice by the Sea. Although there were dozens upon dozens of other sailboats racing, the VIP of my virgin regatta journey needs to be showcased, Euphorie, a 42 foot Beneteau (pictured right at dock).

During the regatta course, with the strong winds and spinnaker flying, there were various casualties or better said a combination of injuries to both crew and Euphorie. All in all, the total of five were endured:

3) Twisted spinnaker (A mess that was tested pre-race.)

5) Second sheet broken in approach to Port Everglades on our return….Which sheet? I don’t recall.

In spite of those five regatta hiccups, Euphorie and its crew triumphed with a sixth place finish. The boat’s name surely rang true as I felt sheer euphoria, elation, ecstasy, joy, and jubilation after my wet behind the ears regatta experience. So upon crossing the finish line, the celebrations began. It was happy hour. As my final assignment as Chief Stewardess, I emerged from the galley with celebratory wine and beer.  Now mind you, not just any cocktail server can accomplish carrying two beers in each hand while trying to avoid bumping his/her head or other body parts on the hatch, boom, or numerous other precarious items, but I did it with finesse.

Now with my premier regatta under my belt, I have a longing to learn more. I would like to climb the ranks of the crew for my segunda regatta. Maybe I can serve a dual purpose as a part-time mate and a part-time stewardess. So if, practice makes perfect, I may need to charter a beautiful boat with my sailor mates near in the future. Who’s in with me? 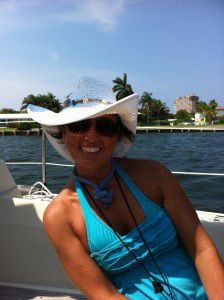 And so, I will conclude this good time and good story with a special thank you poem to Captain Bob, First Mate Jaz, and Euphorie’s crew.

prepare to come about,

and will take a boom to the head sans pout!

I’m sure there will be good times & good stories amongst them too!