Aye, it is true Ms Traveling Pants has learned to speak Pirate. All that was needed was a visit to the Bounty in Palm Beach, Florida this past weekend with a bunch of memateys! Our crew of Captain Jack Sparrow (as you see below) as well as other pirates led meever-curious landlubbers aboard the Bounty, which is probably best known for its usage in not only Pirates of the Caribbean – Dead Man’s Chest, but also the classic Brando film, Mutiny on the Bounty.

So let’s cut to the chase. Let me mate, Cap’n Jack Sparrow, and I give you a lesson in how to talk like a pirate starting with a short list of commonly used terms….

Aye Aye – I’ll do that right away, or “Yes, I understand”

Grog- generically any alcoholic drink, but most likely rum

Lad, lass, lassie – a way to address someone younger than you.

Landlubber- Land lover,  someone not used to life on a ship.

Matey – a friend and/or shipmate

Me– my and/or mine 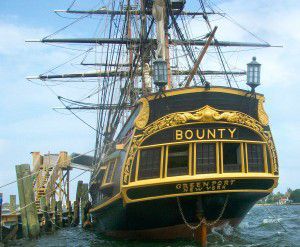 Mutiny – a revolt against authority

Shiver Me Timbers– an exclamation of surprise, shock, and many times of fear

Thar– the opposite of “here”

Walk the plank– no need to define this one… it’s bloody obvious.

Wench– a “lady” (typically a working girl a.k.a. a pirate’s barmaid or hooker) 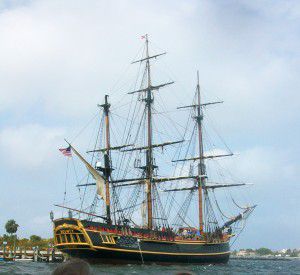 Watch out you scallywags! The Bounty has turned Ms Traveling Pants into a multi-lingual, grog drinking, sailor in search of treasure. Don’t mess with me or me mateys otherwise I will force you to walk the plank.

With or without the Pirate speak, you know I am always up for either a good time or to turn some NOT so good times into good stories.   So pass the grog or some rum, and let’s yo-ho-ho together on more of me and me mateys’ stories.