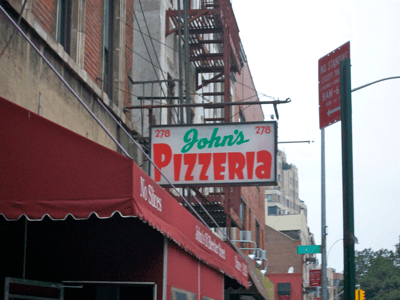 New York City is famous around the world for being the Big Apple, the City that Never Sleeps, and the home of the best pizza in the world. This summer, I had the opportunity to revisit NYC. This time it was not on business as my past two trips, but a relaxing weekend. Believe it or not, it has been nearly twenty years since my first tourist tour of the City. At that time, I went to many of the museums, shopped the garment district, saw Cats on Broadway, and visited Lady Liberty and Ellis Island.

As you can imagine, much can change in twenty years; however, most of the changes were in me. Now having traveled the globe, lived abroad, and married, the city looks so different. I appreciate its diversity, embrace its buzz, envy those that live in the thriving city, and jealous of those foodies that get to experiment with the countless numbers of cafes, bistros, fine dining establishments, and street food carts.

I have to admit, over the course of three days, two areas of my body got a work out: my feet and my stomach. The whirlwind culinary and cosmopolitan tour of NYC did span the city with just enough sightseeing in between stops to burn some calories. The first day began at Grand Central with a quest for one of the New York musts, pizza. The difficult decision was where to get the best pizza. Knowing that I could use a seat and a cold beer to pair with a New York pizza, I passed the numerous Ray’s pizza shops, so and so’s places, and headed to John’s Pizzeria on Bleecker Street. My better half and I got off at Prince Street and walked Bleecker Street taking in the eclectic surroundings and envying the diners that had already settled at the street side tables, but we were on a mission and wanted the best margarita pizza in New York.

With its typical Italian sign in Red, Green, and White, John’s pizza is a nondescript restaurant that advises that the line starts outside as the seating inside is little, only two small rooms with wooden booths and tables that have been carved with previous pizza eaters’ names. Having missed the rush hour of Friday’s lunch, we got a booth and a whole pie, as slices are not an option.

Being in New York, the Midwestern style of Chicago pizza that I grew up with is not its claim to fame. New York pizzas have thin crust. Each slice is about the size of your head. In fact, the real New Yorkers only eat pizza by folding it in half to do a couple of things, eat it faster and avoid the grease. As I enjoy a little spice, of course, I needed the cracked pepper flakes to kick it up a notch.

So the libation of choice at John’s is draft beer. They offer either pints or pitchers. We chose to go outside off our typical beer comfort zone and tried a Yuengling, which appeared to be a darker beer, but it was an absolute delight with the pizza in the mid-afternoon.

From John’s, you are only a quick walk from Washington Square, the home of musicians, chess matches, the “Arc de Triomphe” look a like, and great people watching. Just steps from NYU, the park is a place to see college students reading, catching some rays, and then the rest of the city enjoying playing in the fountains, listening to area musicians, and watching the city’s best mimes, magicians, and the like.

As a whole pie deserves a long walk, I opted to navigate a course to another New York icon and may I mention it was free. Yep, we hopped the train to City Hall/Brooklyn Bridge and headed for the pedestrian walk/bike path of the Brooklyn Bridge. The bridge itself is a beautiful architectural wonder, but it also facilitates great views of downtown New York City and most importantly Manhattan’s mid-town with the Chrysler and Empire State Building. The walk takes about thirty minutes each way if you are taking some pictures and enjoying the sights.

As New York City is the city that never sleeps that doesn’t mean that Ms Traveling Pants toured the city without rest. After a train ride and day of SoHo, Washington Square, and the Brooklyn Bridge, it was time for a nap before a world class meal, which I will highlight in future posts.

Do you have a recommendation for Ms Traveling Pants for New York Pizza? Or a favorite spot in along this NYC route?