Many say that the way to a man’s heart in through his stomach. Well, the same goes for this traveler. A sure way to my heart is through good food. AND, New York City has that.

Earlier this year, with only a quick 48 hours in NYC, I tantalized my taste buds from breakfast through dinner with just enough walking in between culinary stops to make me think that I could possibly be hungry again.

Below summarizes my high points or better said high plates in my most recent culinary tour of NYC. (Note: It had been three years since my previous NYC foodie tour, Momofuku and Aquavit.)

Dressed in multiple layers for a cooler than typical Spring day in Manhattan, my partner in culinary crime and I headed out for breakfast. Located in the East Village, Cafe Orlin was eclectically decorated with its interior design, but most notably with trendy, foodies from all walks of life. In typical style, we ordered two plates to share. One was a first for me, pumpkin pancakes with cinnamon yogurt. The second was a go to favorite, Eggs Benedict. 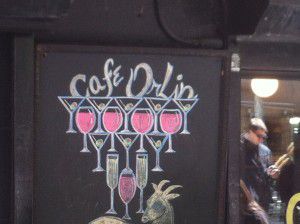 Having been a raving fan of carrot cake with cream cheese frosting since childhood, the pumpkin pancakes were such sweet goodness. However, without the yogurt, it wouldn’t have been the same.  The sweetness was cut with the tanginess of the yogurt to be a divine concoction to be repeated time and time again. And, WOWZA, that dish was only to be topped by the creamy, rich hollandaise, crispy Canadian bacon, and home fried potatoes. As I took a pause, finished my coffee, and sat back, I said, “That is what I call brunch.” I gave it the Ms Traveling Pants Best Brunch Award for 2012.

Pleasantly full and  fueled for a scenic long walk, we left no stone unturned through Chinatown, Wall Street, and over the Brooklyn Bridge amongst Women’s Rights Protesters and a very colorful birthday parade. It was just another 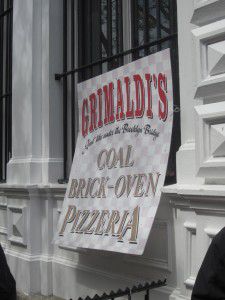 post-brunch, 10K walk in NYC that included paying our respects, but politely passing the staple for pizza, Grimaldi’s as the line was over a block long; plus, we were still held over from brunch. So, we bee-lined it to take a load off on the East River Ferry back to Midtown for a mid-Spring’s afternoon nap before round two of NYC foodie tour that evening at The Plaza Food Hall by Todd English, my new Mecca.

As background, I have frequented Todd English’s restaurants from Boston to Fort Lauderdale to Vegas and now to the Plaza. Although I have yet to met Todd English in person, unlike my foodie tour companion, it was an “I have arrived moment” as I passed the Central Park horse carriages and entered the Plaza to descend into the labyrinth of food. Arranged as both a gourmet shop and dine-in experience hot spot, the hostess led us past numerous tables full of fellow foodies and action stations galore ranging from pizza to tacos to dumplings and more. Delighted, we found our destination at the pasta bar with two chefs running saute. 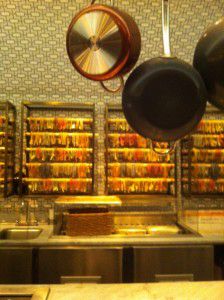 Given a menu of delectable choices, we both opted for our standard, more is better. We like to try many dishes and let the chefs showcase more than just one make it or break it dish. So, our buffet included:

As it was cause for celebration, I washed down the smorgasbord with my favorite light New Zealand Sauvignon Blanc, Kim Crawford. The mini-buffet and drinks were a perfect theatre apperitif for a evening at the McKittrick Hotel for a sold-out experiential rendition of Macbeth called Sleep No More.

Belly full, feet swollen and tired, I hit the bed hard for a well deserved night sleep with plates of pumpkin pancakes and risotto tator tots dancing through my head. Although at bedtime, both my foodie friend and I thought we would never eat again; after two cups of coffee and a sunny NYC day in front of us, we explored the possibility of another culinary stop for a traditional NYC breakfast at none other than Murray’s. 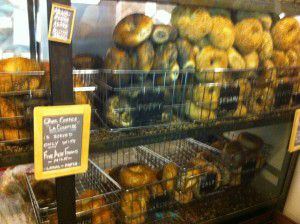 With a line out the door, no more than a dozen small tables, bagels busting from the seams of the counter, and a buffet of cream cheese spreads ranging from sweet with maple syrup and walnuts to savory with lox, capers, and onions, we waited and contemplated our decision carefully as if we were at the Soup Nazi. Armed with two bagels, of course not toasted as it shows the quality of bagel, we scoped a table. My bagel was cinnamon raisin with maple syrup walnut cream cheese. My friend ordered hers with a lox and cream cheese spread. Sitting hidden behind the never ending line of Murray’s fans, we dove into the yummy, chewy bagel goodness with macaroons for a snack later in the day.

With only hours remaining to my 48 hour quick trip to NYC, the needed post-bagel walk through the High Line Park was spectacular. New to me, this urban escape is a great way to utilize an old railway. In our less than ambitiously paced walk, we did enter the Chelsea Market; however, we have to add it to our “To Do List” for next time as our bellies were asking for a respite.

Next time, I will bring my PIC (Partner In Crime), who is also a foodie. We will try out some great New York City Vacation Rentals along another culinary tour of NYC. Stay tuned and hungry!

Many thanks to  my good friend, fellow foodie, and adventurera for a wonderful NYC culinary tour. Here’s to more good times and good stories together.