When you are debating which shoes to bring for a short, yet varied activity stay, are the heels or the hiking boots left out of the bag? In my last trip to New England, I opted to take the heels. Boy, I later regretted my selection. Although prepared with athletic shoes, Mount Monadnock, in southern New Hampshire, certainly tested my grip, balance, endurance, and courage. Next time, I will opt for the hiking boots.

After three days of waiting with rainy New England weather, it was time to hit the trails and burn off some of mom’s home cooking with or without my hiking boots. With some research of the easy, moderate, and advanced trails in the area, I picked a “moderate” hike to 3,165 feet that was supposed to take three hours round-trip. In hindsight, I think that the hiking guide writers and bloggers need to reevaluate the classification of this hike. There were many portions of this rocky, wet trail that were certainly advanced. However, if there weren’t challenges and obstacles the hike would not have been such a good time or now good story. 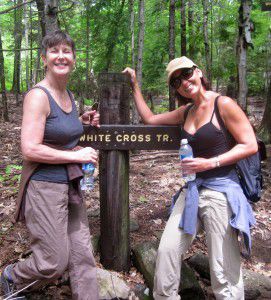 At the beginning of the hike, we both look ready, dry, and confident. Receiving advice to take the White Dot Trail up and the White Cross Trail down, we followed willingly like lemmings behind families with small children, packs of athletic college students, and older veterans of the trail with hiking sticks. 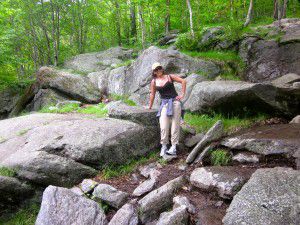 We quickly realized that breaks would be necessary to reach the summit. With the trails heading straight up the mountain, all punctuated with rocks, boulders, and pure straight rock face to encounter, it was NOT a Sunday stroll nor hike. Fueled by nuts, biscotti, fruit, and pub cheese sandwiches, we both trekked on. (**We later found out that Monadnock is in dictionaries as a mountain or rocky mass that has resisted erosion and stands isolated in an essentially level area. The word is named after this Mount Monadnock in NH!) 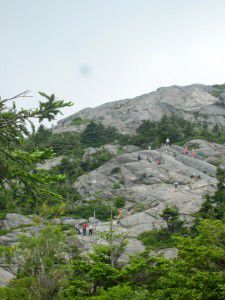 After two and a half hours into the supposed “three hour round-trip” hike, we arrived at a glorious lookout (featured at the beginning of the post) only to see in the distance dozens of other adventurous hikers climbing even higher to reach the top of mighty Mount Monadnock. With the compelling desire to turn around and go to a spa for a pedicure and massage, we continued ahead for bragging rights and yet another feather in our hats. 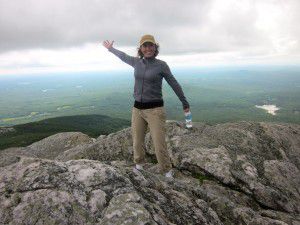 Upon reaching the summit, we realized that we were not far from the clouds and stormy ones at that. The panoramic view was spectacular as well as a rest very welcomed. However, the summit stop was shortened with raindrops. Both leery of going straight down on wet and even more slippery rocks, we quickly added a bite or two into our stomachs and started the descent.

Although hiking up Monadnock was much work because of its elevation; it cannot compare to the impact and treacherous climb or stumble down. Both of our knees, muscles, and joints began talking to us, first very quietly, but by the end screaming for an ibuprofen. The rain and moisture made the White Cross Trail more like a mountain stream than a trail. My shoes and clothes were thoroughly soaked as each step I felt like a sponge. In spite of the rocks, difficult ascent and descent, and rain, we both had no falls, but numerous near falls.

After a five hour hike up and down Monadnock, my mom stated, “I think this is something I will only do once.” I thought the hike was certainly challenging and my body didn’t forgive me for the next two days. So, I can definitely understand why the gift shop was selling various t-shirts, pens, magnets, and more that stated, “I survived Mount Monadnock.” (Like the Mount Monadnock’s page on Facebook, here.)

Will I go again? If given the opportunity, I certainly will seize it. Until then, here’s to more good times and good stories.