With the changing colors and temperatures,  it is clear that autumn is here.  In my last post with my video, Fall Colors in New England, I shared only one of the highlights of autumn, its majestic colors.  However, I feel that fall’s special aroma must be mentioned.  Although each family or region may have a distinct definition of a fall aroma, I would like to share mine. My definition of the true autumn scent includes apples, whether apple cider warming on the stove, an apple pie cooking, or a crisp apple straight from the tree.

Having made such a mark on our culture with sayings such as, “as American as apple pie,” did you know that apples have only a small history in the United States?  In fact, apples were first brought from England in the 1600s by the Pilgrims to the Massachusetts Bay colony.  So, as to not fight what is natural, I have to default to, “when in Rome do as the Romans do,” or in my case when in New England do as the New Englanders do, PICK APPLES.

Having Drew’s Farm, a pick your own orchard in Westford, Mass., near to my family’s home, I was ready to hand select my fall prizes. Before heading into the orchard amongst the rows of trees, I asked for recommendations as to which apples were at their peak to pick. Like a homing pigeon with two peck bags in hand, I headed up the slight slope to find my favorites, who both happened to be at their peak: Cortland and McIntosh (“Mac”).

The orchard was a brilliant display of fall with rows of apple trees with sunny yellow leaves and the sweet smell of apples wafting through the crisp air.  Upon finding the Cortlands, my apple picking skills quickly came back to me from my childhood in Wisconsin.  There I lived nestled in a small valley next to an apple orchard and served the famous 10 foot apple pie each year at my town’s apple festival called the Apple Affair.

For those not familiar, picking apples is easy.  First, select an apple (typically from the outside of the tree as the outside ripens before the inside). Then, grab each apple with a cupped hand.  Next, gently twist each and the apple will release from the tree. 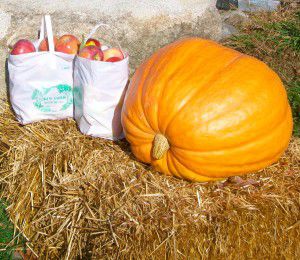 With two full pecks of apples,  I had plenty for apples pies with the rest for my favorite midday snack, apple slices with peanut butter (If you haven’t tried, you must. It is to die for).

I went to the orchard during off peak times and had the orchard to myself, but for those of you looking for a full day of fall activity and entertainment, most orchards have  hayrides, corn mazes, pumpkin patches, and a tasting room for warm apple cider, cider donuts, and other apple sweets. If you have yet to pick your winter stash of apples this autumn, check out some recommended places for picking your own:

Wisconsin Pick Your Own Orchards

Washington Pick Your Own