Although nearly 15 years since, I called Madrid home. There is a piece of my heart that still resides in Madrid in its culture, music, food, and its “la forma de ser” (way of being / way of life). With that said, I wanted to share the post below written by Destinia.co.uk who provides a gamut of recommendations for a first timer to Madrid to a repeat offender or once ex-pat like myself.

Madrid is the capital city of Spain, located in the very center of the country. Home to Real Madrid F.C., one of the world’s best known football teams, this city is known for its culture, its gastronomy and its nightlife.

Some of the city’s most visited places include the spectacular royal palace located next to the Sabatini Gardens, the ever crowded Plaza Mayor (pictured right) and the emblematic Plaza de Sol. A short train trip away lies El Escorial, a historical residence of the Royalty near the mountains that now houses the basilica and the Pantheon of Kings. South of the city lies Toledo, the ancient capital of Spain where Christians, Jews and Muslims used to live.

Madrid’s Golden Triangle is the triangle formed by three of the city’s best known museums, the Prado, the Reina Sofia and the Thyssen Bornemisza. The museums offer discounts for groups and there are hours when admission is free. A short distance away stands the imposing Palacio de Comunicaciones, one of the finest examples of the city’s architecture. Currently this palace located in the Plaza de Cibeles is the City Hall.

Visitors can take the double decker tourist bus that explores the city’s historical centre, where the main hotels in Madrid are located, and the financial district next to the Santiago Bernabeu stadium. For a greener option, visitors can opt for a bike ride near Madrid Rio, the recently rebuilt river front.

For a taste of the authentic Madrid, visitors can stroll around the traditional markets. The Mercado de San Antón, located in Chueca, and the Mercado de Antón Martín have been transformed from old fashioned markets into trendy ecologically conscious stalls where locals can enjoy a caña.

The city’s famed nightlife is by no means limited to one area. Moncloa is traditionally known for its wide choice of student bars, and Chueca is a barrio known for its gay friendly bars. La Latina is the place to visit if one wants to enjoy a caña while people watching. Huertas, located in the historic centre, is a place where one can meet students, locals hanging out with friends, middle aged couples enjoying a night out and visitors who want to find out what the city has to offer.

Those who want to enjoy the city’s hip culture and visit the places where the Movida Madrileña took place can spend a night out in Malasaña. This centric area is filled with emblematic 80’s bars, alternative clubs and chic lounges standing next to small designer boutiques and vintage stores.

Those who want to soak up the city’s glamour can spend a day shopping in the Serrano area. Serrano street and the adjoining streets are known for their many designer label boutiques and exclusive cafeterías and restaurants where visitors can enjoy some of Spain’s finest cuisine accompanied by a local wine. 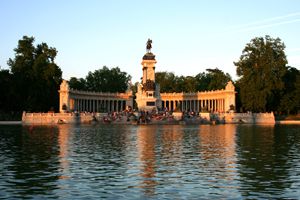 One of the city’s most visited places is the Parque del Buen Retiro, which stretches across the city from the Puerta de Alcala to the Prado Museum. Its tree lined avenues are decorated with statues, and visitors will be able to enjoy a ride in the row boats in the pond. The Crystal Palace, one of the park’s best known features, is now an art gallery.

Here’s to dancing the paso doble, a stroll (paseo) in the Retiro,
and great tapas, food, and futbol!  Stay tuned for more good times and good stories.
**Guest post provided by Marina, travel writer for Destinia.co.uk, providing hotel and hostel bookings around the world including Spain.