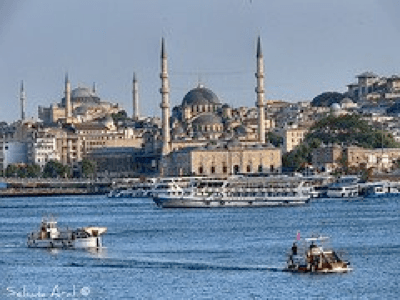 Yes, the holidays are upon us and another year is coming to an end. The time to think of past holidays, the year in review, and reminisce is here. So, let me share with you a “Christmas Eve to Remember” some ten years ago in Izmir, Turkey.

I was traveling with three seasoned travelers over the winter holiday break. One was a classmate going to school with me in Madrid, but from Indiana. Her name was Chandra. And the other two were Chandra’s friends from Indiana; however, both were Russian born, Katia and Natalia.

We all met in Istanbul and after a few days of imbibing our weight in apple tea, touring many rug shops, taking our first Turkish bath, and sightseeing in Cappadocia, we planned a visit to the port town of Izmir just prior to departing Turkey and continuing our holiday travels in Italy.

With our handy travel bible in hand, Let’s Go Turkey, we found our reasonable accommodations in what seemed to be a respectable area in a hostel called Hostel Duvon. We split up into two rooms, left our bags, and hit the town. After a full day of sightseeing, tea drinking, and culinary experimentation whether a Turkish version of Baklava or Musakka, which resembles Lasagna, we all returned to our hostel to find that the once empty lobby now had many men sitting on the couches smoking and drinking tea. We continued to our rooms and noticed that strangely some of the other hostel guests seemed to be rather moved into their rooms. In particular, we caught a sneak peek of a room with a radio, ample décor, no suitcases, and full closets. It surely did not look like our rooms with two twin beds, stark décor, two large traveling backpacks, and recently washed clothes hanging to dry.

For dinner that evening, we left the hostel walking through the smoke filled room of men. And in discussing some of the Red Flags we had witnessed, we all stumbled upon a place to eat. In Turkey, or at least ten years ago, it was uncommon for a group of young women to go out to dinner together let alone ask for a drink as alcohol was rather limited. However, it was Christmas Eve and we wanted to celebrate. While enjoying the meal, we pulled the waiter aside and asked him about the area that we were staying and specifically Hostel Duvon. He left the table to get the manager who spoke some English who explained that we were staying in a brothel. Yes, you read it correctly, Christmas Eve in a Turkish Brothel. Now, nothing says Christmas more than that.

Ok, so now the tricky decision comes. What do we do? Should we stay out all night in Izmir where is it uncommon to see women out at that hour or be able to find a place that would be safe to catch some cocktails? Could we go back to the Brothel and hope that strength in numbers works and that moving the furniture in front of the door would keep us safe? Or do we do none of the above? Yep, you got it we decided upon another option.

The manager a very nice man, Ahmet, offered for us to stay with him. Ok, four young women, one complete stranger, Christmas Eve, and in a foreign country. We evaluated the plan. No option seemed safe and we just needed to choose the lesser of all of the bad plans.

Ahmet and his friend that luckily owned a car took us back to the hostel where we took our bags and checked out. I remember that the owner was quite upset at us for cancelling our reservation, but who could blame us for not wanting to be subject to such a place. With all of our bags, we could not fit in one car; so, we needed to get a cab to fit four savvy travelers escaping a hostel turned brothel and our bags. After what seemed like one of the most uncomfortable “sardine can” car rides out to the suburbs of Izmir, we arrived at Ahmet’s apartment. It was a rather unkept, cement high rise. There was an elevator, but I don’t remember that it worked.

After walking up various flights of stairs rather unknowingly trusting our new host, we arrived. It was a bare apartment with a Turkish bathroom (yet another story), a small kitchen, and two rooms, neither of which were very equipped. One was his bedroom and the other a living room now turned into our bedroom for the night. As hospitable hosts, Ahmet and his friend with an English/Turkish dictionary in hand began the “conversations” of the evening. And, in the spirit of the holidays, they brought us snacks. Now, there were not chestnuts or egg nog, but walnuts to be cracked and fresh sardines. Yes, whole sardines freshly caught and then fried. They were presented to the four of us as well as the walnuts on a blanket of newspaper covering the center of the living room floor. I guess that is as “family style” as you can get. Surprisingly enough, this was the first time that I had eaten a whole fish with bones and all. What I do remember is that they were absolutely delicious. This is a tremendous compliment as I am not a fish person.

The night was long with stories in a language never spoken before English/Turkish/sign language. However, the night did have to come to an end and Ahmet was gracious enough to give us various blankets. I remember that it was cold in the apartment and that he did not have a heater so the blankets were needed; however, there was something about them that was just foul. Yes, they stunk. The closest thing I can describe it as would be barnyard.

Regardless of the stinky blankets and being in a stranger’s house, it still seemed like a better place than being prey in the Hostel Duvon. By the way, you start to become immune to the spell by morning and yes, we smelled like barnyard too.

The next day, Christmas, was a new day with new friends. We all safely awoke in not such a strange apartment. In the spirit of Christmas, Ahmet and his friend both helped us find another hotel, this time respectable, clean, and well, not a brothel. We were in Izmir for only a day or two more and saw Ahmet on one other occasion where he took us to a tearoom. We all exchanged addresses and many years later I was still receiving “when come back to Turkey” postcards.

So if you plan travels to Turkey, remember, just like on any adventure…trust your gut instinct about your surroundings and the people you meet. Advice: if you go to Izmir, skip the Hostel Duvon.