I moved to Kauai in late 2013. However, since relocation, my scuba gear remained in my adventure toy closet. That was until this Spring. I couldn’t pass up this adventure travel opportunity, but I needed to dust off the gear and my skills.

After a brief refresher course with Seasport Divers in Poipu and gear check, I was ready to take the plunge back into scuba diving. Most of my diving previously had been in the Caribbean in Cozumel, Bahamas, and Florida. I understood that my Kauai dives would be much more challenging with far cooler waters, perhaps rougher seas, and around sixty feet. Prepared with my blubber-like 5mm wetsuit and Bond girl, turquoise hood, I jumped in with a small group of four divers along with our dive master, Derek, who doubled as the videographer. Enjoy my quickie version of our two dives: Sheraton Caverns and Plate Lunch from earlier this year. 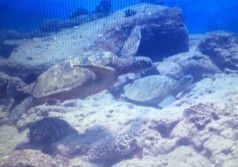 Although I wasn’t going to judge Kauai diving without first doing it myself, I was skeptical if I would give it a thumbs up. However, I was quite surprised. Even before thoroughly descending the rope line, the sea life was abundant. Not only did we see the beloved sea turtles (Honu), but also yellow marlin, spiny lobster, white mouth moray, blue striped snapper, sergeant major, starfish, frog fish, and cornet fish. I had prepared myself that it wouldn’t be a colorful coral reef dive, but I couldn’t have pictured the ability to just swim so up close to one sea turtle after another.

I promised myself after this dive that I would dive again in Hawaii, perhaps even the night manta ray dive on the Big Island. While diving, I concentrate on only one thing, one breath at a time. I realized years ago that scuba diving as well as other adventure activities are my meditation. They keep me in the moment and mindful. It may sound counterintuitive, but adventure sparks one-track thinking and living in the moment. Believe me, there are no to-do lists while diving.

In fact, I wrote about Scuba diving, whitewater rafting in Argentina, and skydiving in Florida in the sequel to my debut memoir When All Balls Drop. Due out in September 2015, With New Eyes follows me on various adventures whether entering the South Florida dating scene after ten years married, solo travel to South America, or doing a seventy-five foot wreck dive off the shores of Fort Lauderdale. Get a VIP pre-release excerpt of With New Eyes by signing up here. 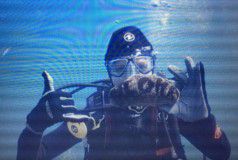 As always, stay up-to-date on more adventure travel stories and tips from Hawaii and more destinations by connecting with me on Facebook, Twitter, Google+, and YouTube. If you are looking for a powerful story and book, check out my memoir, When All Balls Drop, and its sequel, With New Eyes (due out in September).