When in New Zealand, do what crazy Kiwis and adrenaline junkies do, BUNGY JUMP!

Although it was my maiden voyage to New Zealand with twelve days of adventure travel planned, I thought nothing would kick-off the journey better than bungy jumping 40 meters over the Waitemata Harbour from Auckland’s Harbour Bridge. AND, I was right!

The morning of the jump, the weather gods were in my favor with pleasant 70 degree temps, little wind, and plenty of sunshine making the green waters of the harbour and the neighboring islands and volcanoes an epic backdrop to my scary feat.

I geared up and walked with a small group of other adventureras along the bridge to the bungy jumping pod. With dance music playing and a disco ball spinning, the jump master and assistant greeted us. Although somewhat ready, I would have preferred to go first, but because of the jump line-up, I was last. Thus, I had plenty of time to get jittery. Although I first questioned the music and disco ball, it was helpful in lightening the mood. I thought of successful past thrills such as skydiving (twice over Miami), hang gliding over the Everglades, and helicopter rides in Alaska, Kauai, and Florida. However, I was still nervous. I was throwing myself off a bridge without a tandem diver, glider, or pilot with me.

After my two jump mates threw themselves off the bridge and successfully came back, it was my turn. I hobbled with the bungy tying my feet together to the platform. I said to the jump master, “I will not be looking down. Just tell me how far to go and when to jump.” Within seconds, I smiled hesitantly for the camera. 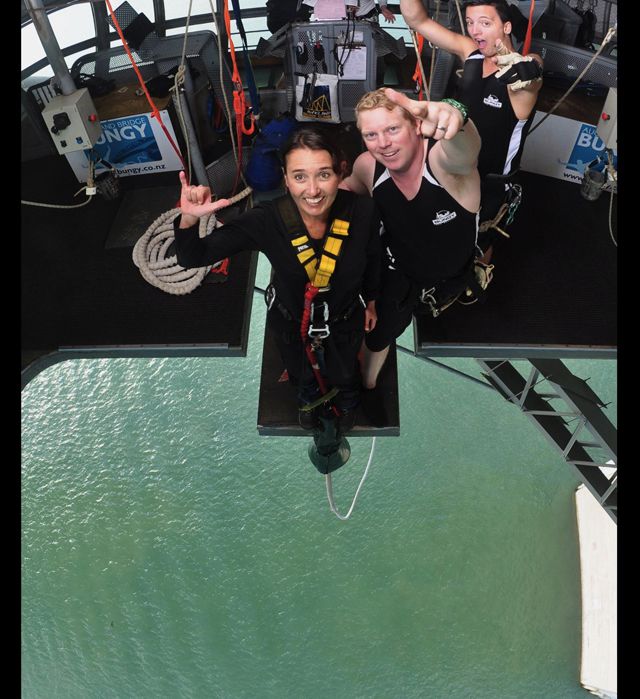 Then, I was given my clearance to plummet to my thrill-seeker pleasure. Ready, Set, Bungy Jump New Zealand!!!!! 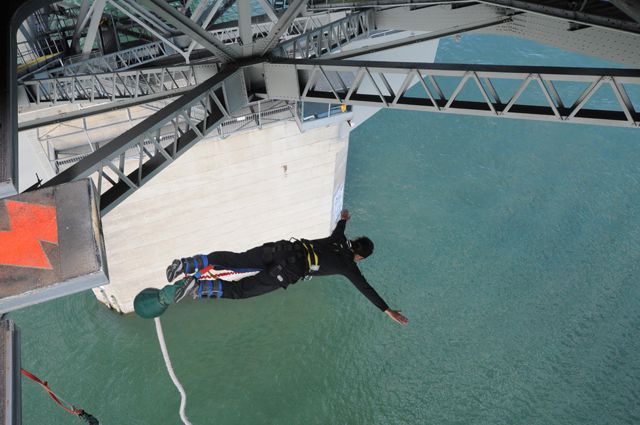 OMG. In a matter of under a minute, I fell towards the cold waters of the harbour. Once at max length, I bounced back almost to a vertical standing position under the bridge. 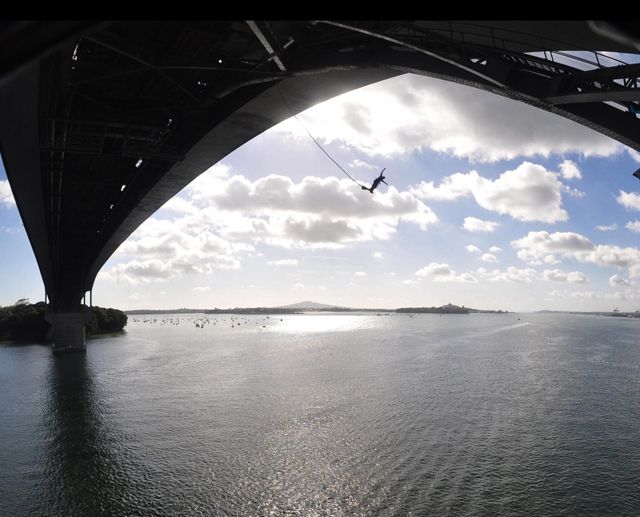 I continued to bounce and bounce again until I felt the bungy pulling me back to the pod. To prevent the remaining blood from going to my red, I pulled my leg release to enjoy the ride. The view of the SkyTower, Rangitoto Island (a volcano), and the bay was kick-ass. Although I thought the view was impressive the day before when I when over to Waiheke Island via ferry, there is something to be said for the super focused, adrenaline-vision, I had on that VIP ride up to the Auckland Harbour Bridge Jump.

Here’s my jump in video:

Would I do it again? Abso-f——lutely!

This was just my first stop of many along my adventure travel in New Zealand. Stay up-to-date on more travel stories and tips from New Zealand, Australia, Kauai,  and more by connecting with me on Facebook, Twitter, Google+, and YouTube

Please send me your comments about this adrenaline post and your personal travels to New Zealand. I’d love to hear from fellow adventureros and wanderlusters.