At the tail end of a whirlwind, eight-day, maiden voyage tour to Down Under, including Tasmania, Sydney, the Blue Mountains, Ayers Rock, the Great Barrier Reef, and Cairns, I had traveled by catamaran, helicopter, bus, foot, cable car, plane, semi-submersible, and car. I was short one of the most pleasant ways to travel; yes, you know it, by train.  With only a day left in Australia, I got out my only clean clothes that remained and booked a day of adventure on the Kuranda Scenic Railway just outside of Cairns.

After zig-zagging via bus up the hills overlooking the Bay of Cairns and the Coral Sea, I arrived at the small town of Kuranda, which has a large craft market, a couple of watering holes, and its Koala Gardens for those animal lovers that want photographs holding koalas. With about an hour to spare prior to departure, I took a spin around the shops and purchased my go to souvenirs, can coolers or koozies. It just goes to show, you can take the girl out of Wisconsin, but you can’t take the Wisconsin out of the girl! In passing, I witnessed other travelers purchasing everything from original aboriginal paintings and didgeridoos; however, I stopped and flat out gawked at one particular type of keepsake that was quite popular, a kangaroo scrotum pouch made out of real kangaroo privates. Although the shop owners claimed that the scrotums attracted the opposite sex as well as brought long-life, luck, and happiness, I knew it would be in my best interest not to buy a kangaroo scrotum regardless of the claimed properties.

Within a matter of minutes, I strolled from the shops down the hill to the depot to find my seat in the 1800’s style train. And, I was off for an hour and half ride winding my way through the rainforest of Queensland passing rugged gorges, mountains, and waterfalls, over a total of a little over thirty kilometers. (I’m still slow at the km to miles, kilos to pounds, and Aus dollars to US dollars; so, I suggest you convert it!) 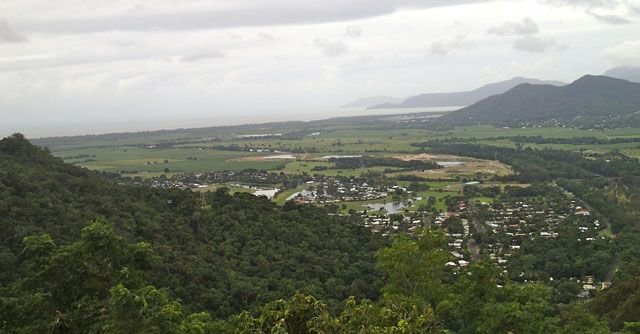 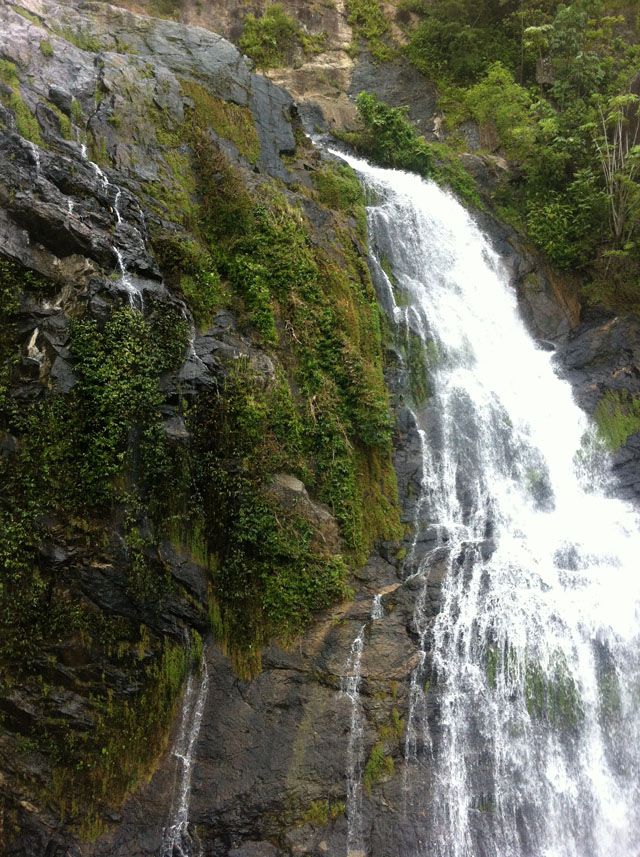 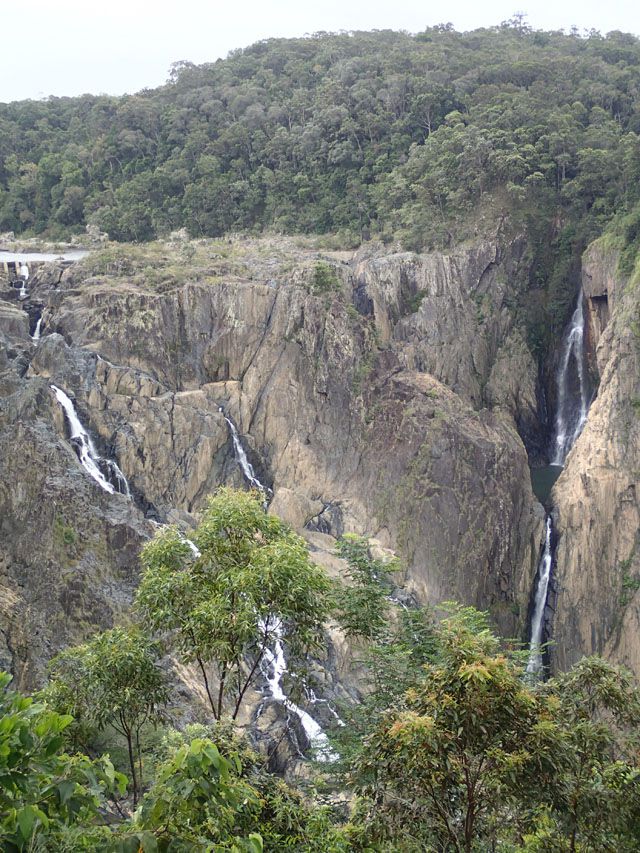 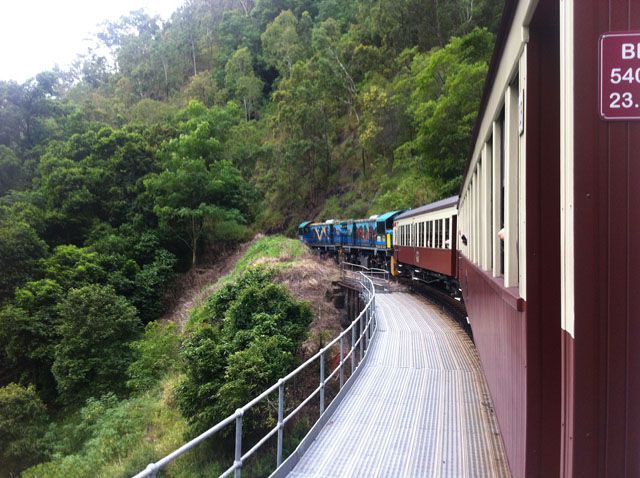 As you can see, there are plenty of opportunities for taking photos while the train gradually descends from Kuranda to Freshwater Station. However, don’t worry if you are a very particular or even professional shutterbug, there is one stop near Barron Gorge. There you are allowed to exit the train to stretch your legs and take photos from the overlook.

Although I was tempted to do just the railway experience, I was intrigued by two options that complement the railway: the SkyRail and Tjupakai Aboringinal Center. As I said, I had already traveled by almost every mode of transportation; so, I selected Tjupakai. 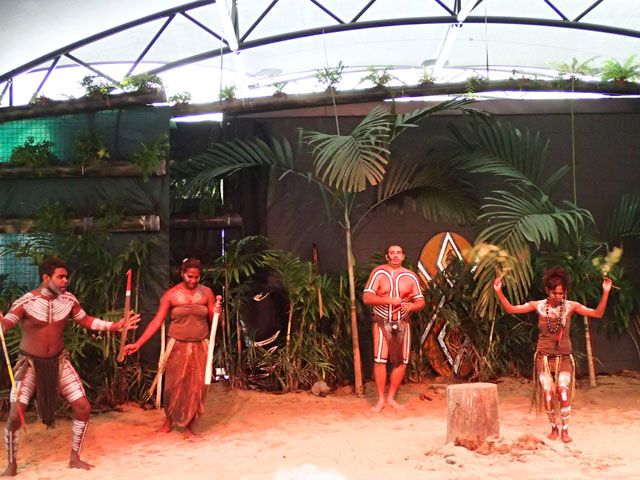 At Tjupakai (pronounced jab-oo-guy), I thoroughly enjoyed my last taste of the Aboriginal culture. My favorite activities were the dance and musical performances — you know I couldn’t sit in my seat — as well as learning about medicinal uses of plants by the Aborigines, demonstrations on didgeridoo playing (women are NOT allowed to play the didgeridoo), a weaving workshop, and learning how to throw a boomerang. However, I must recommend that everyone try the face painting. Don’t leave Tjupakai without your Aboriginal design! By the way, don’t you like my dots? I felt like I was wearing my snorkeling mask from the Great Barrier Reef the day before. 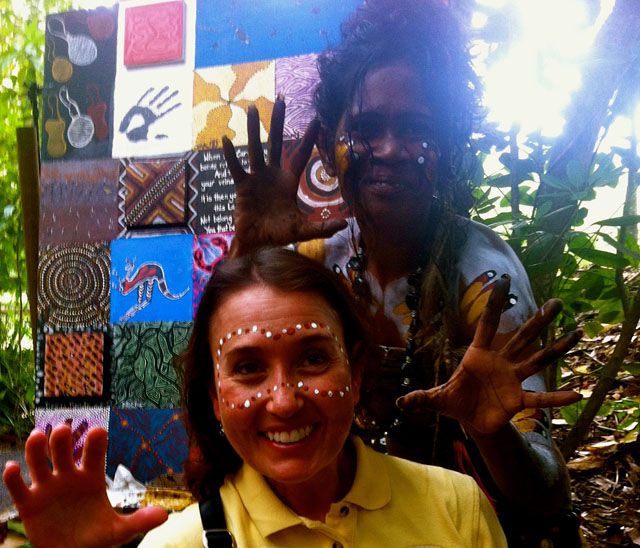 As always, stay up-to-date on more travel stories and tips from Australia, New Zealand, Kauai, and more by connecting with me on Facebook, Twitter, Google+, and YouTube. If you are interested in learning more about the Kuranda Scenic Railway tour in particular, click here.