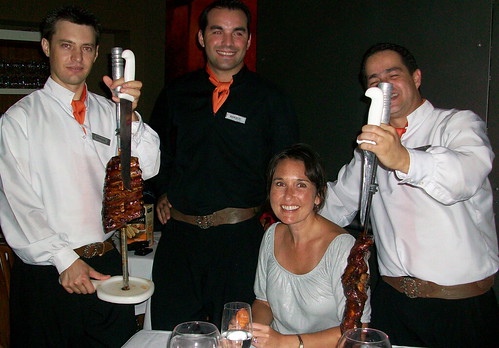 Growing up on the Western side of Wisconsin like I did, you are either of German or Norwegian descent or both. If you’re not, you eventually become a part of those cultures through your neighbors, friends, and festivals. It is very common to host communal dinners that offer a buffet of lutefisk and lefse or bratwurst with sauerkraut.

Since that time, I have had the opportunity to experience other culinary delights also with a communal buffet style. Being married to a Mineiro (from an interior state of Brazil called Minas Gerais) as well as having traveled to Brazil, I have become a rather good Brazilian cook and appreciative of many of its culinary additions to the world. Of the most famous are probably feijoada, a hearty black bean and pork stew garnished with a slice of orange to cleanse the palate, and a style of eating fit for carnivores called churrasco that I mentioned in the title.

Churrasco is a term that across many cultures implies the grilling of meats. In Brazil, churrascos are done on skewers with everything from chicken hearts to sausages to beef top sirloin called picanha. The style of serving the Brazilian churrasco is called rodizio. Characteristically, there is a buffet of typical sides dishes, salads, and soups such as black beans, rice, farofa (manioc flour dish), assorted cold cuts, and cheeses. Once one has filled his/her plate, waiters that are dressed as typical gauchos (cowboys like pictured above) come by with large swordlike skewers of meat to serve the guests tableside with as much or as little of each as they would like.

It is customary at most rodizios that each guest is given a chip to place by his/her plate. One side indicates to the gauchos that you would like to be offered more meat. The opposite side of the chip shows that one is finished or as I like to refer to as “rearranging” for another helping.

This weekend I visited the local churrasco called Chima. I was not shy to try the filet mignon, bacon wrapped chicken, sausage, or picanha. I did pass on the chicken hearts. However, if someone from the Travel Channel or Food Network would like me to try it on my next visit, I will document it. (Hint Hint)

By the way, a nice red Cabernet Sauvignon goes well to compliment the meat, but if you are looking to end or start the meal with a libation completely refreshing try a Caipirinha, which is a sweet mixture of Brazilian cachaca, fresh lime, and sugar.

Signing off…..
Garota de Traveling Pants
(for any of you out there that are fans of Garota de Ipanema)