Having spent three glorious months in Alaska, I’m now in the final month of my adventures. I have and continue to enjoy the overwhelming beautiful, mysterious, and vast Last Frontier. As a way to whet your thirst for travel to Alaska as well as spread my travel stories, I created my Alaskan Adventure series. Throughout the series, I have highlighted my firsthand experiences about glaciers, hiking trails, exploring Alaska by water, “Planet Kermit,” and in this post, my visit to Skagway for a ride on the White Pass and Yukon Route.

For those of you that are unfamiliar with the White Pass and Yukon Route, let me quickly get you up to speed. For those of you in the know, perhaps use this as a refresher.

After the news of the discovery of gold in the Yukon, the stampedes began in the late 1890s for the Gold Rush to Alaska. Many Americans became gold crazy making their way up the Inside Passage waterway from near or far, arriving in Skagway to begin the overland trek to the Klondike. After an already grueling route to get to either Skagway or the neighboring Dyea, then, the fortune seekers had another nearly 600 miles of treacherous trails and waterways ahead before reaching the Klondike.

The way to the Klondike could be done from Skagway or Dyea via two routes: the shorter route or the longer one. The shorter of the two routes was the steeper Chilkoot Trail starting in Dyea where each would have to carry his/her supplies. The longer of the two was the less steep White Pass where pack animals could be used. Regardless of the route chosen, many stampeders died along the trail as well as thousands of animals. It was clear that an easier way to reach gold was needed. That’s where Michael Heney’s expertise and guts came into play.

As an experienced railroad contractor, Heney joined forces with British funds to start construction of the White Pass and Yukon Route in May 28, 1898. It was certainly a miraculous feat completed in 1900. It took tens of thousands of men and 450 tons of explosives to overcome the harsh and challenging climate and geography. It was truly constructed against all odds with a climb from the sea level of Skagway to almost 3,000 feet at the summit within just twenty miles at steep grades of almost 3.9%. It is no doubt why often times the White Pass and Yukon Route is referred to nothing less than a wonder of steel and timber. 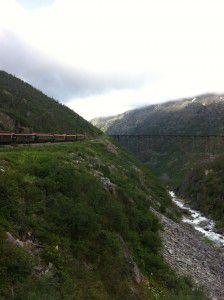 Since its construction, the Gold Rush dwindled, but mining operations continued by larger corporations in the Klondike. Over the decades, the use of the railroad for transporting ore slowed. Thus, it was later transformed to assist in construction of the Alaska Highway and finally converted into a excursion railroad. It is now a International Historic Civil Engineering Landmark as well as one of the most popular excursions for the visitors to quaint Skagway, Alaska.

Keep abreast of my recommendations, adventures, and more by connecting on Facebook, Twitter, Google+, and/or YouTube. Here’s to more good times and good stories in Alaska and beyond.