Holiday travel is typically something very special, whether it’s because of the people you are with and/or the place. My recent holiday was no different. Just days after making a trans-Pacific move from the mainland to Hawaii’s farthest island, Kauai, I knew I was in for an unusual, yet adventure packed holiday.

Over a three-day trip, I along with my fellow adventurero and PIC explored the North Shore of Kauai. We paddleboarded the Hanalei River, hiked the Hanakapiai Trail from Ke’e to Hanakapiai Beach, and camped at Ha’ena State Park. Although we had done the first two of the three activities before, the North Shore of Kauai and the beginning stretch of the NaPali Coast are worth repeating. (They are do NOT miss activities for newbies!)

The third activity, we had not done before, camp at Ha’ena State Park. With strong tradewinds gusting upwards to 20mph, large surf, and occasional passing showers, it appeared that camping was going to be a challenge and perhaps a no go. However, with some creativity and an adventurous spirit, we found a perfect Christmas Eve camping cave. Yes, I said camping cave.

Along the road to Ke’e Beach, which is the end of the road on the North Shore of Kauai, there are three caves: two wet and one dry. The dry cave, Maniniholo Dry Cave, is located adjacent to Ha’ena State Park at milemarker #9. During the day, it is a wonderful 300 yard deep cave, safe for all ages to explore. **Warning: Be careful of your head. The ceilings are low. Bring a flashlight or headlamp.

Running a little behind after a holiday aloha hour with friends and dinner, we arrived at the park and camping site in the complete dark. We had two options: seaside camping with possibilities of rain, wind, and thunderous surf OR an evening protected in a cave without the challenges of the elements.

You can bet we chose the cave. I mean, how many times have you said to your friends and family that you have slept in a cave AND on Christmas Eve? Yep, zilich, nunca, nope, never…

And so, we, armed with headlamps, two backpacks, cooler, tent, sleeping bags, and a wet air mattress, trekked into the dark, volcanic, oceanside cave. Despite the good gear and my caution, I hit my head on the low ceiling, bonking my noggin while sherpaing my backpack and cooler to our perfect spot. Meanwhile, my PIC manhandled the air mattress, backpack, and other supplies to base-camp.

We selected our nook of the cave because of the cave’s particular height. Not only could we stand upright, but also we had ample space to set up the tent. However, we had created a major flaw. We had a wet air mattress from being in the back of the truck from the day’s rain. And, from the truck to the cave, it had acquired a boat load of sand. However, have no fear. We had a tarp, which we brought for rain. It could now have an alternate use atop the air mattress instead of atop the tent. **Warning: If you choose this option, you will be reminded of those annoying plastic sheets that you had as a kid at your grandparents’ house. If you toss and turn, no one will get any sleep with a tarp as bedding. 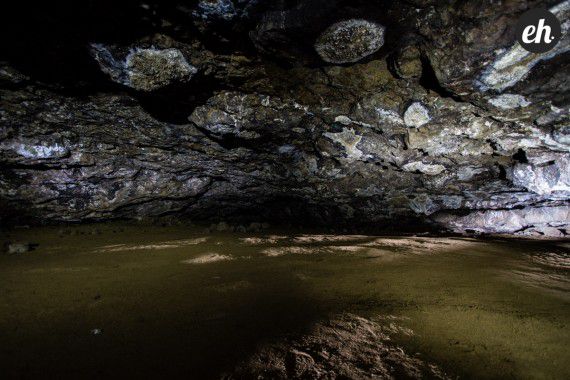 Given the fact that we would be sandy regardless, we set up camp quickly without much attention to keeping the tent clean and turned out the headlamps. Shocked and very fortunate, we were the only ones in the cave, despite the mystical, intriguing ambiance. We fell asleep with the lullabies of the muffled crashing waves outside.

Regardless of the cave’s allure, the night was not a good night of sleep for either of us. It was neither the fault of nature nor the cave. The culprits were a damp, sandy tent along with noisy bedding (aka tarp) that made for not much shut-eye.

In any case, by morning, we were grateful for the location. No only was the surf sound muted, but also the early morning roosters sounded afar. And, for the first time on the island, we had stayed in bed until 8am because of the cave’s dark, cool interior as well as great sound proofing from the early-rising, island mascots.

So, although we found an unusual holiday hideaway, I’m not sure if we would classify the experience as a good time. I think it would be better called a good story as both our bodies were regretting the choice for the last couple of days, wanting a real, dry bed without the rustling of plastic.

Calling all adventureros/as out there….

Have you had an unusual holiday hideaway?

Where’s the most unusual place you’ve slept on your travels? I’m delighted to hear from my fellow adventureros/as.

Stay up-to-date on more adventure travel stories and tips from Kauai, Quebec, Peru, Cuba, Finger Lakes, and more by connecting with me on Facebook, Twitter, Google+, and YouTube.