Having been to Cuba 5 times this year with another 4 trips scheduled this fall, this last Saturday, after nearly a month and a half since my last ropa vieja (shredded beef dish of Cuba) or helado de coco (coconut ice cream), I had a craving for Cuban food.  Only living roughly 25 miles from Miami, there was no choice, but to head to Calle Ocho (8th Street) in Little Havana, Miami.

Having experienced Calle Ocho poco a poco (little by little) in the years that I have lived in South Florida, I had my favorites, but it is always better to go with a local and particularly one that is also a foodie. So, I chose to do a Little Havana Food and Walking Tour with Viator.

I was pleasantly surprised that the group was rather small. We were 6 foodies from South Florida, Ohio, Texas, and Australia all led by an expert foodie and local, Mirka. Meeting around noon, all were hungry; so, our first stop was at El Pub, which is a diner-style, family run restaurant. At El Pub, we enjoyed an array of appetizers. It’s famous for its tostones, which are fried green plantains. However, theses plantains are shaped into cups and filled with chicken, shrimp, or picadillo (ground beef). My favorite was the picadillo filled toston as it had olives and onions to add a little extra sabor (flavor). After having a pick me up Cuban coffee, I noticed that there was not only the diner-style counter, but also a traditional ventanilla (window). Just like in Cuba, the theme remains here in Calle Ocho where each restaurant has a walk-up window from the sidewalk for Cuban coffee, chicharrones (fried pork rinds), and pasteles (pastries).

Of course, we were not completely stuffed, but satisfied and ready to soak up more Cuban culture than just the food. As we walked, we listened to salsa pouring out of the various shops. One shop, we just could not resist entering was the Cuba Tobacco Cigar Co., which has been run by the Bello family for over 42 years in Little Havana. The son of the original Bello sat outside of the shop, Don Pedro, welcoming all and posing for pictures while another of his relatives rolled the cigars for us to witness, smell, and smoke. I passed on the cigars. I’ve never been much of a smoker. 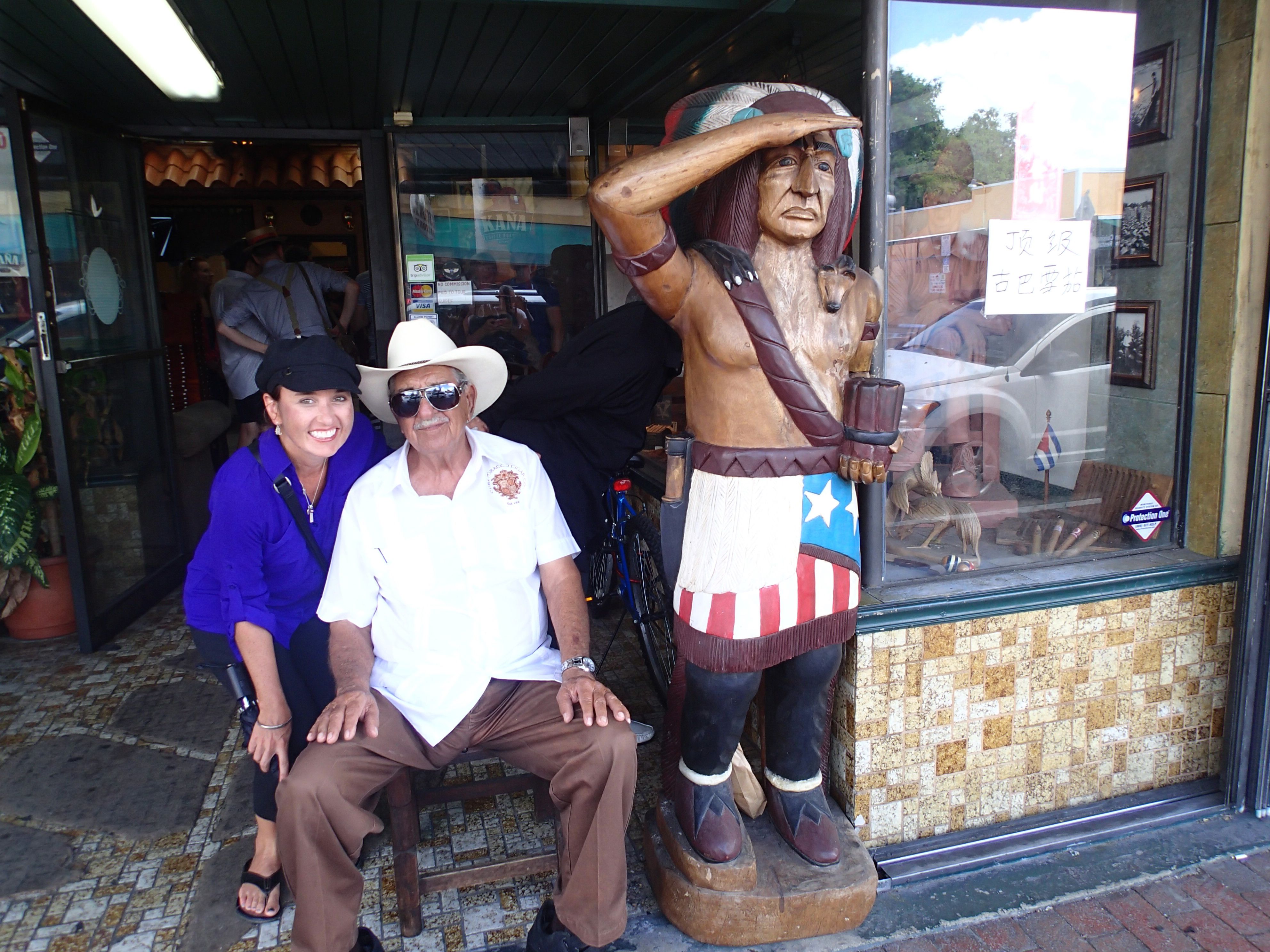 Afterwards we walked along Calle Ocho’s Walk of Fame highlighting Cuban artists such as Celia Cruz and other Latin stars such as Julio Iglesias and Thalia until we reached the Exquisito Restaurant. This stop was for the famous Cuban sandwich, but a Cuban sandwich with an American twist. We were presented with the medianoche (midnight), a hybrid of the traditional Cuban sandwich with roasted pork, ham, Swiss cheese, mustard, and pickles, but on a different bread. The traditional bread is a light white bread (aka Cuban bread), but the medianoche uses a sweet bread. It is said that as the Cuban workers got off of their late night shifts in Miami, they wanted something substantial like a Cuban sandwich, but with a sweeter flavor. And so, the medianoche was created. To this day, it is on every Cuban restaurant’s menu. Of course along with the sandwich, we were served a plate of fried plantain chips with mojo dipping sauce, which is sour orange or lime juice, a little garlic, and olive oil. This mojo also serves as the marinade for most chicken, fish, and even pork dishes; although the oil can be eliminated when you have a fatty meat like pork. 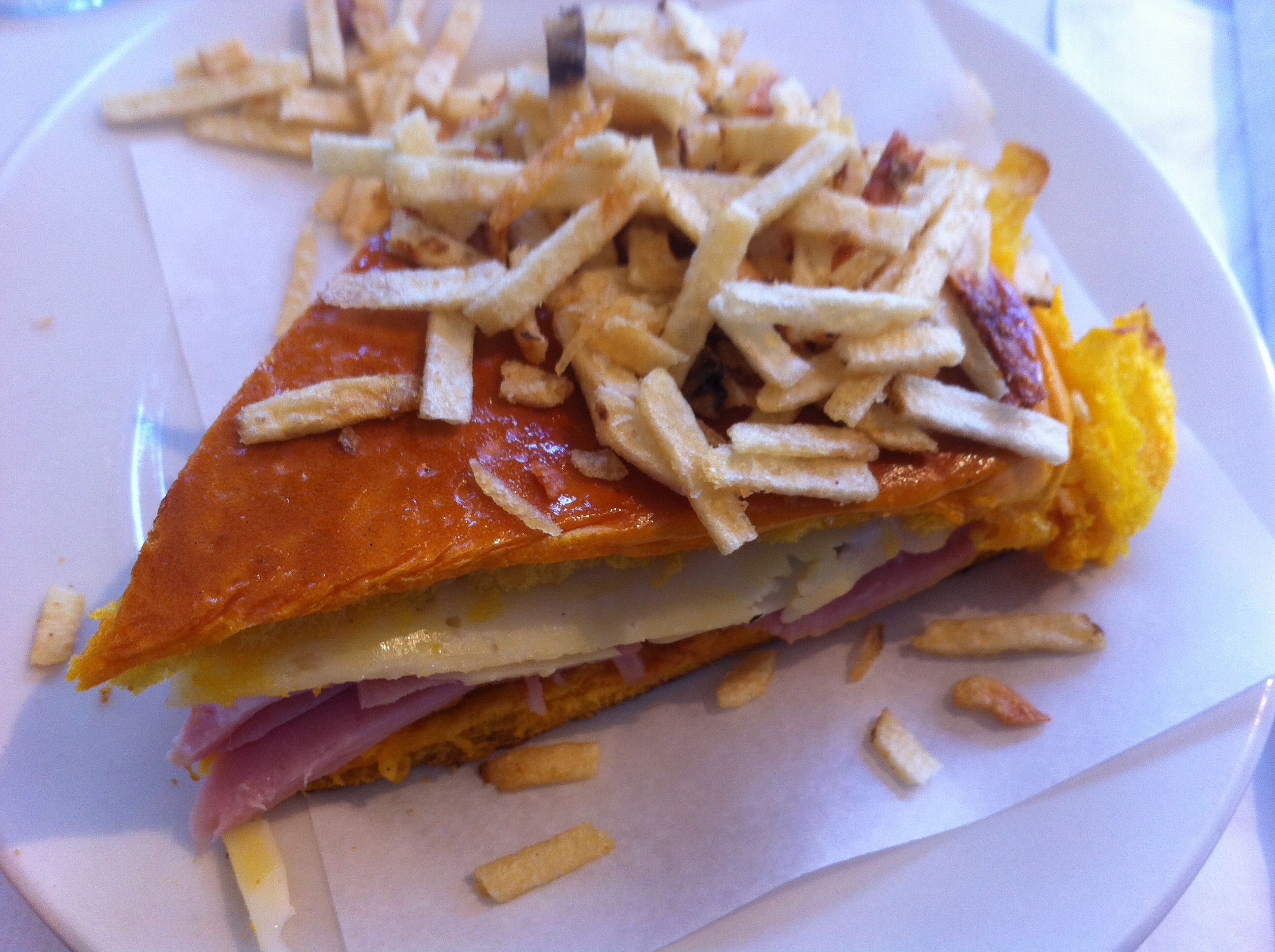 Needing a bit of a stroll and a break, we passed the Domino Park where for the first time I saw standing room only. There were a dozen tables with four players each, primarily older men, but also a couple of women. Some tables were so sought after that there were people waiting to play. You could tell the competition was intense. Although, I have been known to win a domino game or two even in Cuba, I passed on this one because of the wait.

All a little thirsty, we continued on to Pinarenos Fruteria, a fruit stand, which offers fresh coconuts for drinking, papayas, mangos of various types, avocados, and more. Here we sampled guarapo, fresh-squeezed sugarcane juice. Although it may sound very sweet, guarapo is refreshing while subtle in sweetness. The bartender mentioned with a smirk that guarapo can be a cocktail as well; just add rum.

As I typically don’t have many sweets, I amended my M.O. to taste test Little Havana’s best. And, we did not just have one stop, but we had two sweet stops. The first was a traditional Cuban bakery, Yisell Bakery, where we sampled a café con leche (coffee with milk) and a pastel de guava (guava turnover). The guava pastry reminded me of an apple turnover with its light, paper-like pastry sheets with then a lightly sweet guava paste inside. The café con leche was a delight as I had already started to digest all the food and get a little sleepy.

However, the grand finale of dessert was ice cream. I’ve traveled the world trying ice cream from Wisconsin to Italy to Argentina and Cuba. I gave the award of best ice cream to Buenos Aires in 2011 until I traveled to Cuba and tried various types of which my favorite is helado de coco. It was a lovely surprise that Suzy, the owner of Azucar (sugar), greeted our group and told the story of how she same up with the idea to open an ice cream shop. She also added how she has her kids involved working in the shop as well as helping her come up with the recipes. The one flavor that stood out to me was an ice cream that she named after her grandmother, Abuela Maria. The flavor was completely Cuban inspired with guava paste, cream cheese, and graham crackers. It was muy lindo (real cute) that Suzy’s son served me my small cup of Abuela Maria. Que rico! (How rich! How tasty!)

Thoroughly full and satisfied, I have to say that the Cuban food in Little Havana is para chuparse los dedos (aka finger lickin’ good). Now, I’ll have to wait as this Little Havana tour will have to tide me over until my next trip to Cuba at the beginning of October.

Stay up-to-date on more travel stories and tips from Cuba, Peru, Minneapolis, Quebec, Finger Lakes, Berkshires, Western Wisconsin, and more by connecting with me on Facebook, Twitter, Google+, and YouTube. Please send me your comments about this Little Havana post and your experiences on Calle Ocho. I’d love to hear from fellow adventureros and wanderlusters.

****Sponsored tour provided by Viator.com, specializing in sightseeing tours and activities where you tour like a local, but still with the curiosity of a tourist.