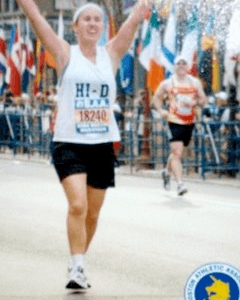 As most Sundays, I take the opportunity to sleep a little late and then take a morning jog for roughly 3 miles. Although used to working out quite regularly, it always surprises me how difficult it is to run (hmmm…that may be because I am not a gazelle like the Kenyan superstar marathoners). However, today I was reminded of my divine physical feat only 5 years ago in Boston for the 108th Boston Marathon in April 19, 2004.

For those of you not familiar with a marathon, it is 26.2 miles. It was first begun in ancient times by a Greek soldier, Pheidippides, a messanger from the Battle of Marathon to Athens. From experience, I must say it is a feat that takes much preparation, dedication, and an inner drive to continue through pain. Unlike many other marathons, for the Boston Marathon you must qualify in another marathon in order to qualify to run.

Somehow I was asked by a colleague of mine, if I would like to run the marathon. At first, I thought absolutely no way, but after a good night’s sleep the competitive side of Ms. Traveling Pants came out in full force. Within a week, I fully investigated the possibilities of running officially or unofficially as a “bandit” as they say in Boston. Additionally, I signed up for a running group that was specifically training for the Boston Marathon. At the time, it was late October, just the right amount of time to ramp up from 10 miles a week to 15 miles to a full marathon and then scaling back right before the mid-April date, called Patriot’s Day.

Mind you training for a marathon in New England from October to April is rather challenging. The winter is brutal and running outside is really the only option to get the training of the hills as well as relief from boredom. Believe me a one hour run on a treadmill is ok, but for 3-4 hours, you begin to feel like a gerbil.

After the winter grind of training, the day was approaching. I didn’t have time or the running speed to qualify at another marathon. Neither did I want to raise enough money to qualify through charitable means. Honestly, to raise thousands of dollars is almost as difficult as the physical torture. So, I started to think out of the box and ask around. I thought that perhaps through my networking, I might be able to snag an official number from one of the sponsoring companies.

It was my lucky year and well one of my friend’s boyfriend’s unlucky year. He worked for John Hancock at the time, which was one of the major sponsors. All employees had the opportunity to get an official number and run the marathon. He applied for the number and did much of the preparation, but suffered an unfortunate injury. That is where I came in. I asked and received. I was now to be an official runner of the Boston Marathon. If you ever want to check the story, I was Mike Fleming coming in at a rather slow 5 hours.

The day of the race was not what any of us had imagined. It was not a cool April day in Boston, but a hot 85 degrees. For all of us used to the cold training, it was frightening. Yes, it may have been great for spectators, but most of the runners, myself included, were fearing dehydration and sheer exhaustion from the heat.

I started in roughly the tenth stable with hundreds of others. After hearing the shot indicating the start, it took about twenty minutes for all those ahead of me to start so that I could begin my slow run towards downtown Boston. The energy from the spectators all along the route was amazing. There are a couple of areas that are just truly unbelievable: Wellesley College for the loud, screaming women and then of course Heartbreak Hill in Newton somewhere around mile 22.

About 1 hour behind my expected time, I reached Boston and saw my friend at the bottom of Heartbreak Hill where the year previously I had been a spectator and participant in beer pong and bbq. Also, my father was waiting in Brookline. I remember that upon seeing him I didn’t want to continue. My muscles were fatigued and my bones hurt with every step.

I continued. About one mile before the finish, I saw my mother. I just wanted to cry. I had nothing left. She and I continued. She was in sandals, but at that point even in sandals she could keep up as my gate wasn’t more than a fast walk. I turned onto Boylston Street. The crowds went wild, yelling my name, encouraging me to make it just another 3 blocks.

I made it on only fumes of my own pride. If I hadn’t told so many people that I was running, I would have pulled off much before. Upon crossing the line, I forced my arms up for the picture above to document the moment. The pain was unbelievable. After receiving my metal, the marathon workers needed to grab the microchip that was in my shoes to measure my time. As I had no strength left, the worker lifted my feet to a stool and undid the shoes to grab the chip. I remember thanking this woman repetitively as I didn’t feel I could do anything but collapse. Wrapped in the typical foil blanket to keep warm, I searched for the bus with my clothing and then meet my family at the letter F for Fleming.

That evening I ate ribs, biscuits, and peanuts in the shell at a place called the Texas Roadhouse. I remember thinking that I would be very hungry, but believe it or not I was not nearly as hungry as on a typical day. Also, I was surprisingly limber that evening. However, the following morning and 2 days after was interesting. All I can say is that the toilet seat in farther down than you think and it was certainly much more challenging after 26.2 miles.

So, will I ever run a marathon again? Absolutely not, I have checked that life goal off the list.