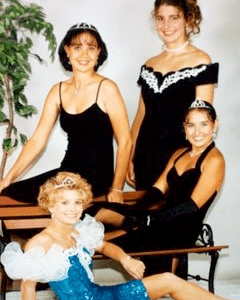 It was the summer of 1995 in a small, Mississippi River town in Wisconsin calledTrempealeau. I had recently graduated from high school and was working the summer at the Historic Trempealeau Hotel as a server until the start of the Fall Semester at the University of Wisconsin at Madison. The summer was nearly half over with the most important weekend of the year upon us, Catfish Days. Always held the first weekend after the Fourth of July, it was the social gathering of the year with family members coming from a far, students returning home, and sightings of old friends from high school.

As most festivals in the area, the weekend included a parade, amusement rides, bike and fun run, golf tournament, fishing tournament, and a pageant. So, on that Thursday night in July 1995, after the interview, fashion show, evening gown, and talent portion, I, Ms. Traveling Pants, was announced and crowned as Miss Trempealeau 1995 or in slang Miss Fish as the celebration is Catfish Days (see picture of Ms. Traveling Pants on bench and court).

As Miss Fish, my duties were limited to a couple of radio shows, MC for the talent show, and riding the Catfish Days’ float that Sunday in the parade as well as for nearly every other Sunday throughout that summer and fall exploring all of the Western part of Wisconsin. You can only imagine some of these events: Sunfish Days in Onalaska, Kornfest in Holmen, Applefest in La Crescent, Syttende Mai in Westby, and Octoberfest in La Crosse. Regardless of the size, they all paled in comparison to Catfish Days.

For the weekend, Trempealeau (French for mountain with its feet in the water) and its 1,000 inhabitants close down a few streets by the River for amusement rides, food stands selling fried cheese curds, grilled chicken, and catfish burgers, all with the mandatory beer tent. The town would come down to this area enjoy the rides, eat, and then drinking and dancing to a live band that had plenty of Alabama, Brooks and Dunn, and Garth Brooks to satisfy the crowd.

Needless to say, at the end of 1995, I did need to bid farewell and wish another young woman well in her reign as Miss Fish 1996. However, I still have the royal flare….elbow elbow wrist wrist.