When in New York as a tourist, you are constantly tempted to go on organized tours that would make the lines quicker, navigation easy, and include packaged tickets of famous sites such as the Empire State Building and perhaps a harbor tour. Having a huge distaste of such tours, I didn’t waste my time or pretty pennies on the hundreds of offers that I had while in New York. Whether it was Duck tours, double decker buses, or something similar, various times a day it was evident that tourism is big business in the Big Apple.

As I wanted to see the island from the harbor as well, but without having a guided tour or wasting my culinary dining tour money, I chose to take the Staten Island Ferry. There are not many frills with the ride. The ride is free leaving every half hour from Manhattan and taking roughly 25 minutes to Staten Island. The ferry employees open up the doors for hundreds of commuters and tourists to rush to get the good seats or better said the best standing spots. Really you have to see it to believe it, but I would recommend wearing your running shoes, be strategic, and hold your ground. 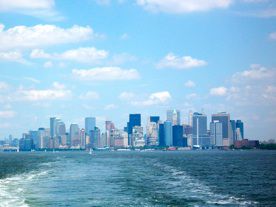 Boarding at Manhattan, head to the starboard side or the right side of the ferry. Don’t bother with the seats. You will want to take a standing space along the open window section. From this position, you will be able to take great pictures of Ellis Island and the Statue of Liberty. If you don’t have the chance to get this space, a second option is the stern, which will lead to great views of Manhattan as well as a less crowded environment. The third option would be on the return trip where you may have a better chance to get a spot in prime location, which would be on the port or left side of the boat.

There are little to no frills with the Staten Island Ferry, but the views are better and much less costly than the other tourist versions. The roundtrip will probably take you an hour and a half. It takes around 25 minutes to arrive in Staten Island, but it is difficult to catch the return trip immediately as typically others have been waiting prior to your arrival.

Keep you posted on other NYC adventures!