Do you remember the Choose Your Own Adventure books from childhood?For those that need a refresher, these books are adventure mysteries written in the second person where the reader assumes the role as the main character. At the end of each chapter, the reader reaches a decision point. The story is guided by these decisions pointing the protagonist to go to Paris or Rome, to run or hide from the villain, to open the green or red door, or numerous other challenges.

Recently, I was posed with a Choose My Own Adventure way to view Florida. My choices included experiencing South Florida by plane, train, or automobile. With the Floridian topography as such that train and automobile are trips rather flat, minus the few hills or more truthfully dumps that pepper the Turnpike North and South, I decided that the most beautiful choice was from a bird’s eye view. So, I signed up for a flying lesson in a Cessna four-seater airplane with Learn to Fly Center in Pompano Beach, Florida. 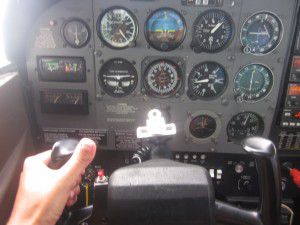 Without more than a few minutes of instruction, to dos, and most importantly to don’ts, my instructor, Paul, kindly showed me to my pilot’s seat. Now this wasn’t a fabricated pilot’s seat in a simulator, but the real deal. I was to take the controls from the get go. Shocked, I was certainly engaged as I got a play by play taxiing down the runway using the foot controlled, rudder pedals to steer before pulling my first throttle and taking off from the Pompano Air Park. Surprisingly, the speed, direction, and altitude came to me much easier that my first flying lesson and first ride in a helicopter late last year. Paul guided me through the gentle steering in order to head a steady course over the Atlantic Coastline up to West Palm Beach County over to the Everglades and returning back to base.

Although I spent most of the flight with my eyes focused on the horizon and controls, I indeed passed the controls to Paul for a few moments to snap documentation of the Best View of South Florida. 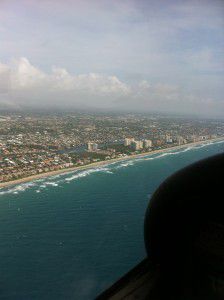 Likewise, with a VIP passenger in the backseat (aka Ms Traveling Pants’ Dad), I was able to score an action shot or two of my debut as a airplane pilot. Quite appropriately, I have named this shot, “Would you trust this pilot?”

I look forward to another Choose Your Own Adventure Day.

As always, I promise to relay the good time, good story, or both.

Until my next adventure….