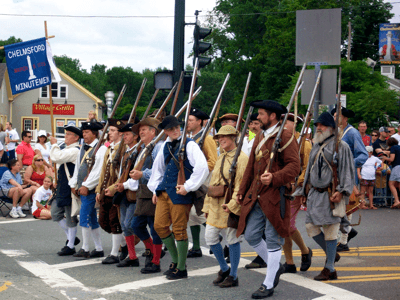 As the majority of us head back to work after a weekend of getaways to campsites, cottages, beach homes, or just a coma induced weekend of lots of grilling and libations, I have just arrived back to South Florida from a very quick whirlwind tour of Boston and a traditional New England Fourth of July.

It was not planned, but yes I stumbled across one of the quintessential components of any Fourth of July, a parade. Last Saturday, I attended a hometown Fourth of July parade in Chelmsford, Massachusetts (just 24 miles outside of Boston and pronounced chums-ferd). With the local crowd waving American flags, kids running for candy thrown by fire trucks blaring their sirens, high school bands marching in step, and bag pipes playing, I certainly received my dose of people watching. However, I have to admit that my absolute favorite part of it all had to have been the Minutemen (see picture above). Just as a history refresher, Minutemen were colonial militia that fought for America’s freedom in the Revolutionary War. They were typically young, very mobile, and quick to respond (thus the name).

Although the Fourth’s festivities and parade were just one of the many good times and good stories of my trip to Beantown, I will be sharing over the next few weeks a series of posts with tips and pictures from the North End, Newbury Street, the Commons, and more.

But, before I go, I will leave you with a piece of Boston trivia.

Why is Boston nicknamed Beantown? As an influential trade town, Boston received much sugar cane from the Caribbean for making other products, including rum and molasses. In colonial days, it was very popular to serve beans that had been cooked in molasses. Today, Boston Baked Beans are not as common, but if you fancy a taste, try out this recipe from one of my favorite sites Epicurious.