As in exploring any culture or area, I believe that holidays, food, and music tell you a lot about the area and its people. So, why treat Alaska any different than I have treated my other travels and adventures to unique places like Spain, Italy, Chile, Argentina, Turkey, and others?

So here’s my take on July 4th in the Last Frontier, Alaska….

Unlike other parts of the U.S., fireworks kick off the party at midnight in Juneau and a day earlier than you would expect. On the evening of the 3rd of July, all of Juneau’s residents from the Mendenhall Valley, Auke Bay, Lemon Creek, and Downtown head to the wharf, across the Gastineau Channel to Douglas island, or top deck of a boat in the channel. At the stroke of midnight, when the night sky is just dark enough to showcase the explosions begin. It is nothing less than spectacular. For thirty minutes, oohs and ahs exude from children and adults alike as the fireworks twinkle on the waterfront as well as echo off Mount Roberts and travel up and down many of the creek valleys. 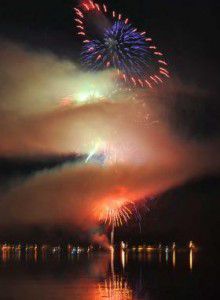 I found the timing of this tradition rather odd as every town that I have ever lived in or visited for the 4th of July hosts its fireworks show on the evening of the 4th. So, I asked around. The locals didn’t seem to know. However, I think I have come up with the reasoning behind the show starting at midnight.  With the main source of employment in Juneau being the government, it would make sense to have the late night out be the one before a full day off, as the 4th is national holiday. This would be unlike having the fireworks on the evening of the 4th and workers returning to the office a little groggy. Instead, all show up to the highlight of the 4th, the parade, a little tired and perhaps a little hungover from Alaskan beers the night before. (I haven’t picked a favorite yet, but I have found the Top Three. I like the Pale, Summer, and White.)

What was very familiar to my past 4th of July celebrations was the parade. At 11am or even earlier for those interested in prime real estate, the entire town came out for the parade. The main street (the only road in and out of Juneau) was closed. Lined with locals in lawn chairs and on blankets supporting the entertainment, the parade of firemen, veterans, businesses, bands of bagpipes, beauty queens, and more threw candy and prizes at the townies and cruise passengers visiting for the day.   All of the paraders were locals dressed in unique outfits whether tribal, ethnic costumes, or animal-like. While strutting their stuff, they got to socialize down the main drag of Juneau saying hi and passing out candy to all of their friends and family after a late evening of fireworks the night before. I know that if I were in fact a local of Juneau, I would be in the parade with a crazy costume or hat. 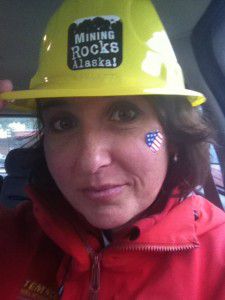 In closing, although Juneau is the state capital and nearly 30,000 in population, it is still very small townish. The parade reminded me of the many small town parades I did one summer as Miss Catfish, now nearly 20 years ago. I would have to say Juneau’s parade is the largest small town parade I have witnessed. However, I left with pockets full of salt water taffy, a patriotic sticker, and this great souvenir hat, “Mining Alaska Rocks!” Thanks Juneau!

So, here’s to more good times and good stories.

*Photo credit to the Juneau Empire for the fireworks shot.