After a challenging, yet eye-opening summer in Southeast Alaska, I wanted to conclude my Alaskan Adventures series with a great finale, a REAL adventure to remember. So, I chose Denali as my finale. For those of you jokers, I wanted to stress that I didn’t choose Denali because it rhymes with finale. Before my return to South Florida, I chose Denali as I wanted a different flavor of Alaska as well as a precious glimpse of “The High One.”

So last week, I set out for a nearly 1,700 mile trip over various modes of transport and in only 4 days. I left Juneau and took two planes, one to Anchorage and then the second into Fairbanks. Luckily, I was able to experience my best and only view of Denali from the air on my way to Fairbanks (seen right).  Over the rest of my stay, the cloud cover wouldn’t allow for a more up close and personal view in the park, not unlike many of the other 400,000 visitors a year. In fact, they say that only 30% of all visitors to the park have the opportunity to view Mt. McKinley. Because I’m an optimist, I believe that I’m part of that 30%, regardless of what any pessimist would try to make me believe that a glimpse via plane in route doesn’t count.

After arriving in Fairbanks, I settled in for a good summer’s nap at the Ah, Rose Marie B&B. In hopes of seeing the Northern Lights, I set my alarm for various late night-early morning hours. Unfortunately, those pesky clouds that covered Denali over my stay were also in the way of the Aurora Borealis. 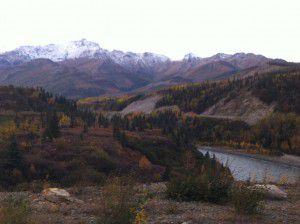 Early the next morning armed with charged camera batteries and plenty of snacks, I boarded the train from Fairbanks to Denali. With the tourist season nearing the very end, I had almost an entire car to myself with the ability to go to the viewing-dome cars to take in panoramic views. However, the best pictures came from outside in the small viewing areas between the cars. Be prepared as it is rather chilly with the already cold temperatures and the racing wind of the train. When not taking pictures, I relaxed over the four-hour ride with a beautiful display of the changing fall colors along the Nenana River (seen left).

Upon arrival at the Park, I got my bearings and set out to stretch my legs with a short hike to the Wilderness Access Center to check-in for my bus. As it was the last official weekend of the park being open, the shuttle buses that frequented the 90 miles of road had already slowed or stopped. This was designed for the annual Road Lottery where 500 lucky residents daily that can drive their personal vehicles on “The Road.”  I lucked out to snag a ticket on the Taklanika Bus, which was the last one that day. This took me 30+ miles into the park where I was privy to a handful of rutting moose within the first few miles of the road as well as my first grizzly bear licking blueberry bushes clean near a small stream. (Sorry my pictures of the wildlife were either of leaves or out of focus moose butts.)

The views from the road were like a beautifully woven tapestry, but in full, vivid color. The combination of the changing colors of the Birch, Aspen, and 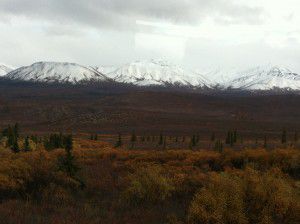 blueberry bushes painted glorious golden yellows, oranges, and reds, which contrasted from the deep green of the White Spruce of the Boreal Forest. And as the icing on top of the cake, the Alaska Range decorates the forest view with snow capped mountains on either side of the road even at the tail end of summer (seen right).

After a day and a half of traveling, I was ready for a shower and a bed. I had found a reasonable place that offered shuttles daily to the park. I stayed at the Denali Mountain Morning Hostel, which is South of the park by a 15-minute drive. It has various cabins and dorm rooms all arranged along Carlo Creek. Conveniently, there is a cafe and Panorama Pizza Pub across the way. On this very last weekend of the season for the hostel, the rooms were fairly full with many Road Lottery winners. Upon talking to many, they have made the last weekend of the season a tradition. 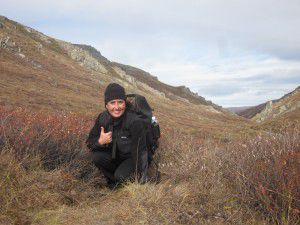 On my second day in the park, I decided that after the shuttle, I was going to do a lot of hiking. After sitting in planes, a train, and up to this point numerous buses, I needed to climb. Knowing that the forecast was iffy with predicted 50 mph winds and clouds that looked like they wanted to rain, I decided to head out very early to hike Mt. Healy. This hike is probably one of the most difficult in the entrance area hikes. In less than an hour and a half and having passes juniper berries, blueberries, rose hips, and more, I reached the overlook and not a moment too soon. The winds became more blustery rushing my decent in a quick under an hour pace. After a lunch of cheddar and reindeer sausage and at a lower elevation, I headed for hike number two at Savage River (seen left). I was hoping to spot Dall Sheep, but I fear that the sheep knew all to well what was coming, a storm. The locals informed me that we were to have 75 mph gusts on my last evening at Denali coming straight from Hawaii and thus named a Pineapple Express. With two hikes and a full belly, the bed came early with a few gusts reminding me of my early morning take off to Anchorage via bus.

My farewell to Denali was certainly windy. Despite the weather, the bus ride back to Alaskan civilization (aka Anchorage) was roughly 6 hours of more picturesque mountain views. Even though, we traveled the main highway. We stopped various times for wildlife sightings. In fact, the largest moose that I saw during my visit was from the highway. It is absolutely clear that this area is the animals’ habitat and not ours. We are visiting their territory.

As far as tips for someone wanting to visit Denali, including things I would do on a second visit: 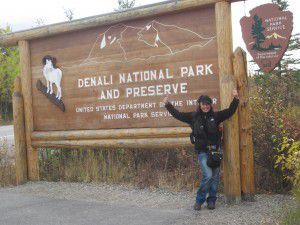 1) Visit for at least a week. Break it up to camp a couple of nights and stay in hostel, cabin, or other the remaining nights.

2) Arrive and depart via train from Anchorage or Fairbanks. This is the most roomy and relaxing way to travel with great unobstructed views. For shutterbugs, it is better picture taking than via bus.

5) Experience the park either by raft or air. There are plenty of tour companies that offer white water rafting on the Nenana and various companies that do aerial touring via helicopter or plane.

Although this is my finale post in my Alaskan Adventure series, I will continue to post some of the best of my summer in Alaska through pictures, video, and more. If you have traveled to Denali, I would love to hear your feedback and experiences. Please leave your comments below.

Also, I wanted to add that in a week, I will be heading to South Florida to warm up. To keep abreast of my South Floridan and future good times and good stories, please connect with me on Facebook, Twitter, Google+, and YouTube.