Summer is here again. It means bathing suit season, picnics, long weekends, and perhaps a lone trip whether a road trip or even better yet across the pond to one of Europe’s finest cities. Six years ago, I took my first trip to London.  I was traveling on business; so, I must revisit with more time for leisure and a deep dive into its culture. With summer being prime time to catch London at its best, I asked a peer travel writer Mika to share her take on the best of London this summer.  Take it away Mika! I’ll be taking your advice on my next trip to London!

Summer is just around the corner and there is no better time to visit one of my favorite cities: London, England. I’ve been to London four times now‚ more than any other foreign city‚ and it’s probably safe to say that it’s indeed my all-time favorite city to visit. And there are many reasons why. The people are friendly, the tube system makes it extremely easy to get around, and it’s relatively inexpensive, with tons of little pubs and food carts where you can get a decent meal for under ten quid. Plus, you can’t throw a rock in this city without hitting a cool free museum. My favorite: The V&A, which happens to be Time Out London’s top pick as well. With fascinating art, fashion, and design exhibits spanning hundreds of years, the V&A answers questions you didn’t even know you had about the culture and customs of days gone by. 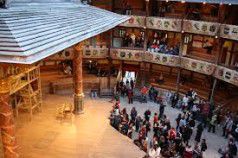 London is definitely a popular tourist destination, but it never ceases to impress me how many tourist hot spots in the city are truly worth a visit. Chief among them: Shakespeare’s Globe Theater. Nestled on the bank of the River Thames, the Globe is both historically significant and constantly relevant. You just can’t help getting a lump in your throat while imagining it as it was back in Shakespeare’s time. The best part is you can still get a Yard ticket for five quid. The Yard is standing room only, so get ready for some tired feet, but it’s the best view of the stage by far. Plus, this is how the common theatergoer experienced Shakespeare back in his time. While you’re in the area be sure to pop into the Tate Modern, because there’s always at least one interactive exhibit worth exploring. Plus, it’s free admission, so you can’t lose.

London is one of the most photographed cities in the world, with such iconic landmarks as Buckingham Palace, Big Ben, and Tower Bridge. As for picture-perfect views of the city, I advise skipping the London Eye and heading instead to the Shard, the tallest building in London. In fact, it’s the tallest building in the entire European Union! Ticket prices are about the same as the Eye, but the wait is generally less and the view of the city is way better.

If you need a more specific reason to visit London this summer, consider one of London’s many amazing festivals.

Field Day at Victoria Park, one of London’s most popular music festivals, brings in alternative acts from around the world. British Airways hails this year’s line-up as a particular triumph, and they make note that the legendary Patti Smith is headlining! There are also tons of activities and contests to keep you occupied between shows. Also, Victoria Park is worth a stroll, with its combination of serene lawns and wilder, less manicured parts.

There’s also London Pride, which is more than a pride parade; it’s a full-throttle, 10-day-long celebration of London’s LGBT community. Few cities put on as big a show of support as London does, and the celebration seems to only get bigger and bolder each year. It’s no wonder London was once nicknamed, “The Swinging City,” which, as I discovered on London Beep, comes from London’s significant role in the cultural revolution of the 1960s.

If you consider yourself a foodie, as I do, then you’re going to want to hit up Taste of London, the annual festival that proves British cuisine is much more than just bangers and mash and spotted dick. World-class chefs converge on Regents Park, offering up dishes from around the world and fresh new takes on British classics, not to mention tons of delectable libations. Come to this five-day event prepared to eat and drink like a king. I definitely suggest pacing yourself‚ a lesson I had to learn the hard way last year.

Whether you’re in London for a few days or a few weeks, doing it on a budget or throwing caution (and your savings) to the wind, it’s near impossible not to have a good time in this city. Summer in London is a summer well-spent, indeed!