With not only a thirst for knowledge, but a hunger for cheese, I jumped at the recent opportunity to learn how to pull fresh mozzarella cheese with a new adventurera and friend, the Chef of Da Campo Osteria, Joseph Quinn, and roughly a dozen other fellow cheese worshipers. Every Thursday in this hidden gem of a restaurant located on the Intercoastal Waterway in Fort Lauderdale, Fl, the Chef prepares a lesson of mozzarella pulling. Demonstrating the technique only once for the students, his goal is that the students will view the basics, begin to pull, and ultimately learn the craft over the next dozen attempts. As seen from the image, my friend, Gunta, and I decided to collaborate in pulling, twisting, braiding, and eating our mozzarella. As most parents always said, it’s nice to share. However, now I know that it truly is better to share. (That is until there is only one piece of mozzarella left.)

Prepared with not one, but anywhere from five to six pairs of gloves to protect our delicate hands from the hot 180-200 degree water, the raw curds were put into the salted water. Our job was to gently massage the curds together into one mass. Then, we were to pull the curd mass until all bubbles or knots disappeared; however, we were cautioned not to let the cheese get tough or rubbery. Although it was not needed, we decided to pull, knead, and braid our mozzarella to get the job done and all the while having fun (a little gusto and wine was part of our lesson). For the finale, we presented our cheesy goodness on a plate with 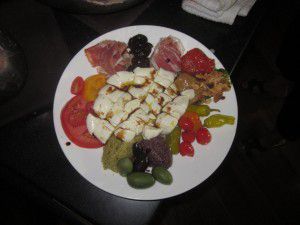 pepperoncinis, olives, proscuitto, nuts, tomatoes, basil, figs, a drizzle of aged balsamic vinegar and extra virgin olive oil, and a sprinkle of both sea salt and freshly ground pepper. With triumphant glasses of wine, all enjoyed plates similar to our cheese masterpiece.

It was nothing less than an euphoric escape from the daily grind. And, unlike most meals that always taste better when someone else prepares them, this was the exception. Both Gunta and I were loving and savoring our collaborative cheese.

Although, I thought I never imagined an encore to a cheese pulling class, there was. I had never heard, tasted, or seen such an dish called burrata; however, I will never be so cheese naive ever again. As a cheese lover, I cannot believe that I lived thus far without the ricotta filled fresh mozzarella delicacy. Talk about heavenly. Who could envision something more delicious or even naughty than cheese on cheese? 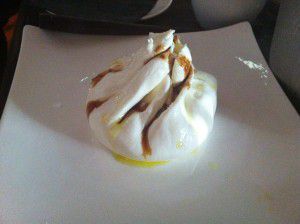 Here’s to more good times and good stories (most include cheeese).

Please comment on your experiences with pulling mozzarella and/or making, trying, or enjoying other cheeses around the world. I’d be delighted to hear from my readers. After all, I’m a granddaughter of a cheesemaker and a Wisconsin Cheesehead!