You can take the girl out of Wisconsin, but you can’t take the Wisconsin out of the girl.

It means wherever I go, I’m the first in line to sign up for exploring another culture through its cheeses as well as its libations. On one of my most recent adventures to the Big Island of Hawaii, not only did I experience my first night SCUBA dive with amazing manta rays, but I also rewarded myself the following day with a tour of the Kona Brewing Company.

I signed up online with the Kona Brewing Company for one of its two daily tours: 10:30am or 3pm.  Although I thought 10:30am was early for a beer, I twisted my own arm reverting back to the old saying, “It’s 5 o’clock somewhere!” After a brief walk-thru the brewery with our guide, we took a seat in the lanai for the best part of any brewery tour, the beer. For the bargain price of $5, I sampled four different Kona Brewing Company beers. Now that’s the best price on any of the Hawaiian Islands for a beer.

Wanna know what I tried on my Kona Brewing Company Tour during my Big Island Hawaii travels? 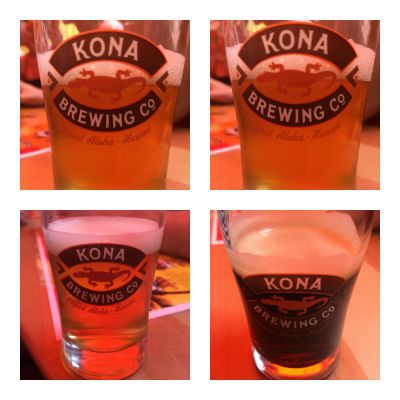 Have you been to the Big Island of Hawaii and sampled the Kona Brewing Company’s beers?Perhaps you stayed for a bite of their lovely pizza with spent grain baked right into the crust? I’d love your feedback on the beers and if you think their slogan of Liquid Aloha is spot on.

As always, stay up-to-date on more adventure travel stories and tips from Hawaii and more destinations by connecting with me on Facebook, Twitter, Google+, and YouTube. If you are looking for a powerful story and book, check out my memoir, When All Balls Drop, and its sequel, With New Eyes (due out in September).