Of my many travels, I have few regrets. In essence, I believe that every occasion in life is either a good time or a good story. For many of you, I’m sure you agree that it is some of the hiccups of life and travel that make for wonderful stories and belly laughs. However with that said, I do have one regret while I lived in Europe. With only a few weeks to travel,  I went straight from Izmir, Turkey to Italy without a stop in Greece. Now nearly fifteen years ago, I feel that another Mediterranean trip may be on the near horizon. In order to enlist some travel advice and whet my appetite for another adventure, I asked Lara Nicotra, a peer and travel writer, to highlight some of her Greek favorites. So, raise your glass of Ouzo,  toast a traditional, Opa, and enjoy Lara’s Greek recommendations!

Surrounded almost entirely by water, you can spend a portion, or your entire visit, on any one, or on any number of the 149 populated islands. Temperature extremes range across Greece, from a low of 31°F, normally in January in the mountainous regions, to a high of 100°F in July and August in the lower territories; though, for the most part, the temperatures along the coasts are similar to those of most Mediterranean destinations, temperate and pleasant. Greece is the perfect destination for a vacation whether you want to enjoy the beaches or experience the history of the ancient Greeks. If you need help planning your trip, you should consult a travel agency and they can help with any questions you may have.

The number of fabulous Greek destinations are too numerous to count; you can travel to large cities with the most historical and modern attractions or to those destinations that will give you a glimpse into the “real” lives of the Greek people. From the educational to the romantic, from the ancient to the modern, from the exciting to the peaceful, there is a place for you in Greece.

Host to the first Olympic Games, democracy was also born here. Athens is considered by most scholars and historians to be the “cradle of Western civilization” and is one of the oldest cities still standing on the planet.

For the adults and the older kids, you have to see The Parthenon. The decorative sculptures, majestic white marble columns and the views from the top are absolutely stunning. Bring water, wear comfortable shoes and don’t forget the camera! Another must-see is the Acropolis Museum. It is less than 1000 feet from the Acropolis itself and easily accessible by public transportation, the best way to visit this historic area, as there are no public parking facilities and limited street parking. You also don’t want to miss the Temple of Hephaestus, the Hammam Baths and the numerous temples and architecture dedicated to the gods and goddesses of ancient Greece. 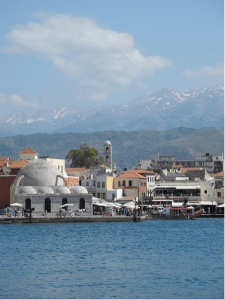 One of the more romantic, tranquil and less-traveled destinations is Chania (pronounced Hania), on the island of Crete. Also called the Venetian Harbor, its narrow streets are crowded with small, intimate shops and quaint restaurants on the waterfront. Chania has been described as being a mixture of Florence and Venice, though with the culture of Crete’s traditions and peoples. You can hike to numerous archeological sites, explore gorges and beaches or just walk hand-in-hand, stopping to eat or take in the sites. 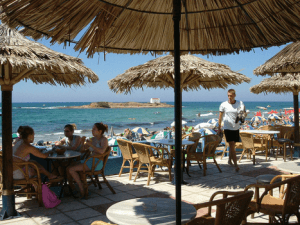 Malia is also on the island of Crete, and is often thought to be for the younger, more action-seeking crowd. Having a diverse selection of over 150 night clubs and bars, Malia is the unofficial “party capital” of the island. In addition to the night life, there is a host of commercial beaches, but also some of the most romantic, isolated and scenic beaches anywhere. If you tire of the beaches and club scene, you can take a sightseeing cruise or travel to the ancient Malia palace in northern Crete. Malia’s unstructured and joyful atmosphere may seem to appeal to just the young, but is also very attractive to “oldsters” on second honeymoons or rediscovering life after children. 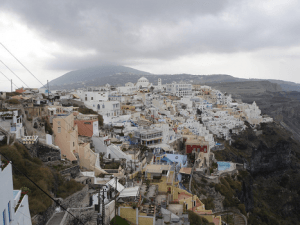 Santorini is growing in popularity. Truly a natural wonder, seemingly fragile villages cling tenaciously to the steep cliff sides from which you can view some of the most breathtaking sunsets in the world. The welcome committee of this island is more than happy to open its arms to the tourists. Diving and kite surfing are as popular as just plain “chilling” on a beach towel at the uncrowded (except for the turtles) beaches that are a healthy trek from the most populated areas and well worth every step taken. 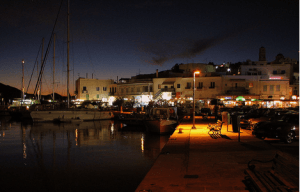 Milos is, by far, one of the most popular Greek island destinations. It is located in the Cyclades Islands, that group of islands encircled by the island of Crete, the Dodecanese islands and the Northeast Aegean Islands in the Aegean Sea. The volcanic activity that formed this island has led to the formation of some of the most magnificent beaches seen anywhere. The most famous is Sarakiniko. The landscape of this beach appearing somewhat lunar-like, the barren, white, rocky coastline completely devoid of vegetation and in stark contrast to the richly-colored, welcoming, turquoise waters. For a more casual glimpse of life on Milos, visit Triovasalos, at the commercial center  and one of five villages adjacent to one another. Triovasalos is an ideal place from which to explore every aspect of Milos. Snorkeling, catamaran cruises, sunsets, good food and friendly people are all to be had in healthy abundance on the island of Milos.

Greece may seem to be another world, but is, in actuality, the historical base from which the modern world, as we know it, has evolved. No lifetime is quite complete without a trip to Greece. Απολαύσετε! (pronounced a-PO-la-fse) That means “Enjoy!” in Greek.

**Guest Post provided by Lara Nicotra . She is the Social Media Specialist at Liberty Travel. She loves to discover new cities around the world and share them with the travel community. Her favorite quote is “Traveling – it leaves you speechless, then turns you into a storyteller.” – Ibn Battuta