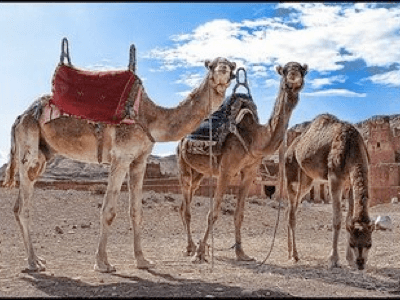 There are certain things that you just don’t forget how to do like tying your shoe or riding a bike. Well, I have to say that riding a camel is certainly not one of those skills, but it is definitely unforgettable.

I rode my first and only camel while on a visit to Morocco. At the time, I was traveling with one of my girlfriends from school. We had already taken the ferry from Southern Spain to Tangiers, haggled in the markets for tea and spices and toured the many souks to experience (smell) where the dying takes place for all of the infamous rugs and tapestries. Then this led us to Casablanca to visit the picturesque mosque and on to Marrakesh.

In what seemed like a day long bus ride from Marrakesh through the mountains, we finally arrived in a small town on the line of the Sahara desert. We asked for a guide that would be able to take us for a journey into the desert. We were led to a clay, earthen building at the edge of town where a Moroccan man, father, and owner of various camels spoke to us and one other tourist from Belgium, Jurin (pronounced urine). Within moments, the price was set and all three of us were to leave shortly on pre-selected, temperamental camels with one guide with little to no English skills and food and tea for four.

The owner and guide loaded our backpacks and supplies strategically on the camels, which did not seem at all happy to be taken out of their stables. My friend and Jurin were the first on the camels. I was entirely pleased that I waited to observe. Having ridden horses as a child, I never liked riding, but I was an average rider with enough skill and time around animals to not fall off. Well, if you have never ridden or seen someone get on a camel, it is rather different that just jumping in the stirrups and throwing your leg over.

To ride a camel, first there is a very wide saddle-like seat that is placed and secured on the camel. With the owner or trainer holding the reins and the camel, you sit on the saddle unable to lower your legs around the camel like you would with a horse then putting your feet in the stirrups. You sit rather spread eagle with nothing to hold onto except the front of a saddle. Then, the camel is instructed to rise. It gets up with both of its back legs first, throwing the rider to a face down position while holding on for dear life until the front legs catch up.

All three of us, successfully in uncomfortable riding position, departed for the desert with our guide on foot. To add to the complete camel riding experience, I must explain a little about the gate of the camel. The horse has a stride that one can get used to it is almost like a forward and backward motion that the rider emanates; however, the camel’s gate is not one that is easy to compliment or survive. A camel walks with one of its front legs and the back leg of the opposite side at the same time; thus, providing a very jerking, unpredictable gate, front to back and side to side motion.

The ride of my other two companions ended very shortly out of the compound. They said they wanted to save their behinds. Well, I was stoic and stayed on, but also I stayed as I feared the dismount needed to get down from that damn camel. After what must have been an hour and a half, we could no longer see the compound; we were in the middle of the desert; and my butt was hurtin’. The sun was down, the moon was rising, stars began to explode through the dark sky, and we made camp.

I have never camped without a tent; so, once again this was a first. We laid out blankets from the guide and then arranged our sleeping bags on top. The guide prepared a tangine (typical dish prepared in Morocco with a terracotta dome shaped cooking vessel). It was made with various vegetables and a mixture of chicken and lamb which was cooked over an open fire with plenty of tea to drink. The food was great and only complimented by the incredible sky. Although I grew up much removed from the city lights, I had never and have never since seen the sky so bright with millions of stars. Like most camping evenings, once you have eaten, there isn’t a TV or radio to turn on, so it was goodnight.

I have to admit I felt a little scared knowing that desert bandits could come and take us for ransom, but it didn’t happen that night and we awoke to the most glorious of mornings. I have always loved water and have gravitated towards the ocean and the beach; so, I was surprised to witness that the desert is indeed gorgeous. It is not the water, but the sky that produces that contrast of blue and tan that is similar to the beach.

Needlesstosay, we returned early in the morning, all on foot. No one was willing to torture their bottoms again on those cranky camels. Upon arrival at the compound, we gathered our things, but not before the owner talked with Jurin. We later departed heading back into town, when Jurin shared with us that he was asked by the owner to trade two camels for the green-eyed one (me). I guess I should have been flattered as camels are expensive and I have since inquired that two camels is a very generous price for a young-twenty something green-eyed woman. Luckily, Jurin understood that just because he was in our company, it did not mean that either myself or my friend were his property.

So, it was an evening to remember filled with many firsts whether riding camels or being bartered for a pair of camels where we gained a travel partner for the rest of our Morocco trip, even if his name did sound like urine.